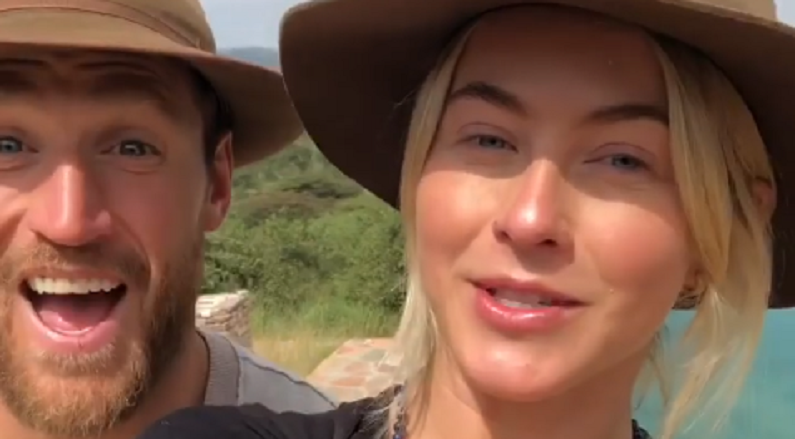 TV Shows Ace previously reported that Julianne was spotted with British actor Ben Barnes. Meanwhile, Brooks has been hiding out in Idaho. The couple just flirted on social media. It’s clear that they’re still on speaking terms. So, what happened between them?

Julianne Hough and Brooks Laich have split after three years of marriage. The pair announced their split to People on Friday, May 29.

“We share an abundance of love and respect for one another and will continue to lead with our hearts from that place,” the couple said in the statement. “We kindly request your compassion and respect for our privacy moving forward.”

The couple’s statement comes after reports surfaced about troubles in their marriage. Us Weekly previously reported that the couple was “not doing well.” The outlet reported back in January that the couple “were having problems” in their marriage. But insiders close to the couple claimed that things were “totally fine” between Julianne and Brooks. The insider said that they were “working through any issues they previously faced.”

MOVE with me, DANCE with me, be FREE with me during @kinrgy’s class this Saturday at 11am PST! Head to the link in my bio to sign up, hope to see all you beautiful people there. 🌍🔥💧🌪

The former America’s Got Talent judge was spotted going for a walk with Los Angeles with actor Ben Barnes amid the coronavirus pandemic. Earlier this year, Brooks shared a cryptic message on Instagram about starting a “new stage” in his life in 2020. He said that he looked forward to “stepping into a new chapter in my life.” Julianne commented on his posting, writing, “so beautiful” with a heart emoji.

Meanwhile, Julianne has been without her wedding ring. Most recently, she appeared in an Instagram clip on January 4 for her new fitness project, Kinrgy. She also shared a video of herself decorating their Christmas tree without her ring.

It’s clear there’s still feelings there between them. The couple has been social distancing for several weeks. Julianne Hough and Brooks Laich decided to quarantine separately. This led the reality star to publicly flirt with her husband on Instagram, per Page Six. He posted a series of self-proclaimed “over the top and ridiculous” thirst traps.

He’s not hot on the market yet. Brooks posted the photos as part of a challenge for his podcast.

THIRST TRAP! I just heard that term a few weeks ago, and our @howmenthinkpodcast producer @torrbelle challenged me do my best “thirst trap” photo for this weeks episode! So here’s 3 ridiculous shots for you to choose from 🤦‍♂️. Tell me which one is your favorite (photo 1, 2, or 3) and what the “thirst trap” caption should be. Just completely over the top and ridiculous, but who gives a damn! Best part was watching @hebercannon die laughing behind the lens. So here you go internet, feast your eyes on this senseless carousel! And make sure you check out today’s episode of @howmenthinkpodcast as we have 2 thirst trap veterans in @_paige.renee and @harryjowsey on the show, and they give you the do’s and don’ts of “thirst trapping”! By far our funniest episode yet, we had a blast goofing off for an hour! Click the link in my bio to tune in! 🤣😎💦🤦‍♂️

“This is awesome haha also the fact that you just figured out what a thirst trap is,” Julianne wrote underneath Brooks’ shirtless photos.

“@juleshough you know how i do (5 years late),” he jokingly responded.

Brooks stayed in Idaho while Julianne remains in Los Angeles. She previously described their separation as “magical.”

“I’ve been on my own. My husband is in Idaho doing lots of yard work,” Julianne revealed during an Instagram Live for Oprah magazine back in April, “and so we’re kind of doing our separate things right now, but it’s been a magical time.”