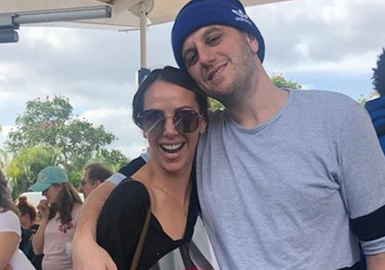 Vanderpump Rules star Kristen Doute is slowly opening up about her new boyfriend, Alex Menache. She first mentioned him on Instagram Live in March 2020. Then, Kristen talked about Alex on a We Met At ACME podcast episode in the beginning of May 2020.

Next, she posted two pictures with Alex on Instagram on May 15. Recently, Kristen spilled more details to Us Weekly and told fans that he appears in a couple of chapters of her book, He’s Making You Crazy. On Wednesday, May 27, the VPR star posted several pictures of her and Alex on vacation.

On May 27, Kristen shared pictures on Instagram of her and Alex’s Tulum trip. The post shows the couple enjoying riding bikes, swimming, and adventuring together. Kristen added the caption, “Remember when we went to Tulum and I got our credit cards stolen (and your license) but we traveled and went on adventures and swam freely? I miss that,” with a sun emoji. The VPR star did not clarify when the pictures were taken. But, their getaway appears to have occurred before the coronavirus outbreak.

Technically, no one stole the credit cards. Alex says that Kristen, “Left it in a taxi and it was unreturned.” Kristen agrees but thought that saying they were stolen made for a better caption. Alex also said that the experience was “unforgettable.”

In previous Instagram posts, fans expressed their love for the couple in the comments. The approving comments continue on this post, with statements like, “You guys are too cute,” and kiss emojis. Even VPR star Lala Kent left a heart emoji in the comments. Fans are happy to see Kristen smiling and doing well.

Fans support Kristen amidst drama with other VPR stars

As VPR fans know, a couple of the women on the show have been butting heads with Kristen lately. There’s been ongoing tension between Stassi Schroeder, Katie Maloney-Schwartz, and Kristen because of their relationships with Brian Carter. Lately, it seems that Stassi and Katie have turned against Kristen in response to her on-and-off relationship with Brian. Even though Kristen has ended her relationship with Brian, the other women still hold grudges against her.

Fans told Kristen via Instagram they are on her side. One user commented, “Good for you Kristin. Now Katie n stassi can suck it. You look happy.” Some said that they hope Kristen, Stassi, and Katie can figure things out, while others tell Kristen to cut them out of her life. Kristen didn’t respond to these comments, so fans will have to wait until the next episode airs to see what’s going on between the three women.