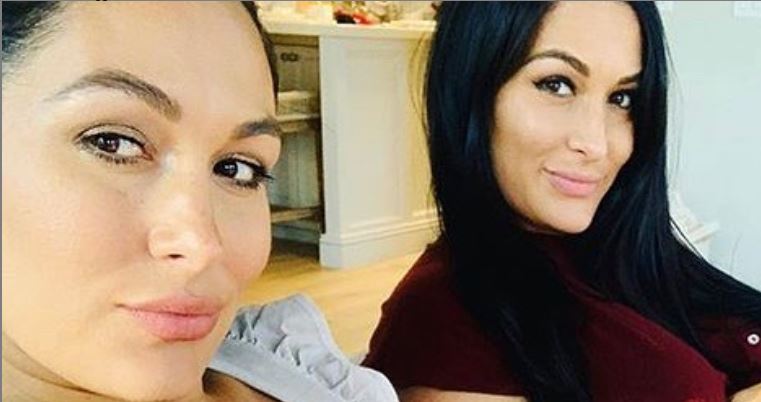 “I had that conversation with Artem. I told him, Look, I have good days and I have bad days, but I don’t want to lose you. If you want to put up with what I’m going through and stay by my side, do it. If you want to walk away and we come back to this relationship down the road, I one-hundred percent understand,” say’s Nikki. Of course, Artem decided to stay by Nikki’s side.

It’s been a busy day podcasting @thebellaspodcast, creating, Memorial Day sales, signing for our memoir, Incomparable for @premierecollectibles and swimming laps. Love that my little one is always sending me love taps throughout the day. Best ever. ❤️

Nikki Bella Was Back And Forth On Reality Show

Looking back at Total Bella’s Nikki sees how everyone saw her being wishy-washy with Artem. Nikki said, “Artem was my rock and you don’t see that on the show.” With her doing interviews because her and sister Brie’s memoir is out, Nikki gets asked a lot of questions about her past. Nikki doesn’t want people saying, “Oh, poor Artem.” People don’t know the conversations me and Artem have had, which has helped us be so strong,” Nikki said.

“I’m with the world right now, I’m watching this season and I’m team Artem,” she jokes. Nikki sees how she might come across on the show, citing her going back and forth about moving in with Artem as an example of her indecisiveness. However, she wanted to give her perspective of what was happening at the time of filming Total Bellas.

Nikki Bella said, she know her and Artem’s relationship is difficult to relate to. Because, if you have never fallen in love fast you wouldn’t understand. Nikki recently told her sister on an episode on their podcast, “Some relationships, it takes a little bit to fall in love with that person—which is normal and okay—and sometimes you fall in love the minute you see someone or after the first date. That’s okay too. If you’ve been in that situation, you become wishy-washy because you’re fighting so many emotions.”

Chigvintsev met Nikki Bella when he was her partner on Dancing with the Stars in 2017. The twosome reconnected after Nikki’s public break-up with John Cena. Nikki and Artem expect their first child together in early August. Artem didn’t waste anytime making Nikki his fiance after news of her pregnancy. In November Artem proposed to Nikki on a romantic trip to France, and of course she said “yes.”

There’s been no mention on E! News if a wedding date has been set for the two lovebirds. You can watch Total Bellas on E! on Thursdays.