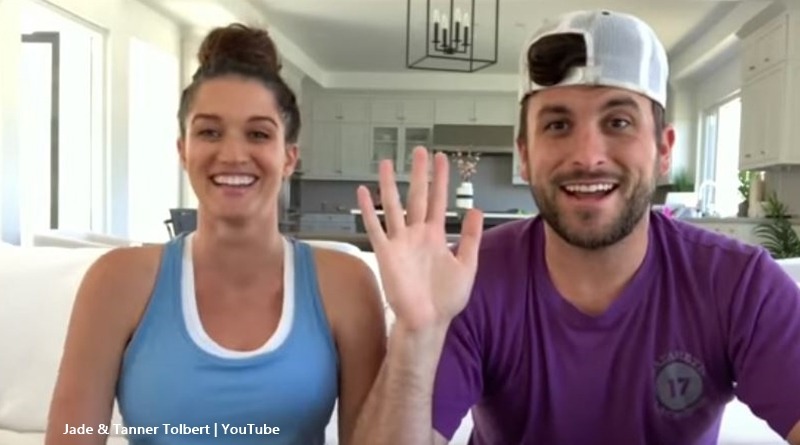 BiP fans know that Jade Roper and Tanner Tolbert manage to look good even hanging at home. Once, they fell asleep at a party, and still looked flawless on the couch. But now, they revealed their hygiene habits during the quarantine. It looks like things slip a bit, at least for Tanner. Actually, many people suggest on social media that they also have the same problem.

Tanner seems worse than Jade when it comes to taking a shower. TV Shows Ace reported that some months before the coronavirus quarantine they went to a party. But, tuckered out from child-rearing the Bachelor in Paradise couple both fell asleep. However, somehow, they managed to look immaculate, even while sleeping. But that probably changed a bit since the coronavirus started. At least, on Tanner’s part. He confessed about how he showers way less these days.

The confession about showering and hygiene came on the Quarantine Confessions show, US Weekly noted. According to Tanner, he thinks he showers about  “twice a week on average.” Actually, he admits that sounds “pretty gross.”

But, that doesn’t mean he avoids water at all. In fact, they installed a “pool and hot tub.” Tanner thinks that counts as a shower. And, Jade chipped in that she thinks that’s really “disgusting.” The conversation revealed though, that of the BiP couple, Jade’s more likely to hit the shower.

Jade of Bachelor in Paradise takes refuge in the shower

While Tanner avoids the shower a bit and goes around smelling like “pool water,” Jade seeks out the shower quite often. She described it as a place where it’s “quiet.” She said, “I do it more often because that’s kind of my me time, my quiet time.” However, sometimes her daughter Emmy also sneaks in. With two kids, she loves the time to herself. Jade described it as saving her “sanity.”

She added, “I can focus on myself — I can feel the hot water and just breathe and just be alone.” Certainly, she finds herself in the shower almost every night.

The BiP couple also talked about drinking. Tanner says they don’t “drink alcohol at home.” And, Jade said that he “doesn’t really like wine.” But they drink a couple of glasses “here and there.” Presumably, Jade drank a bit before she announced her pregnancy. She’s now expecting their third child.  The couple already raises Emmy and her little brother, Brooks. Additionally, the couple discussed binge-watching TV shows. Everyone relates to that.

Can you relate to the fact that BiP‘s Tanner showers less than Jade during quarantine? What about using the shower for some “quiet time?” Perhaps if you’re a mom, you get where she’s coming from. Sound off in the comments below.

Remember to check back with TV Shows Ace often for more news about the cast of ABC’s BiP.