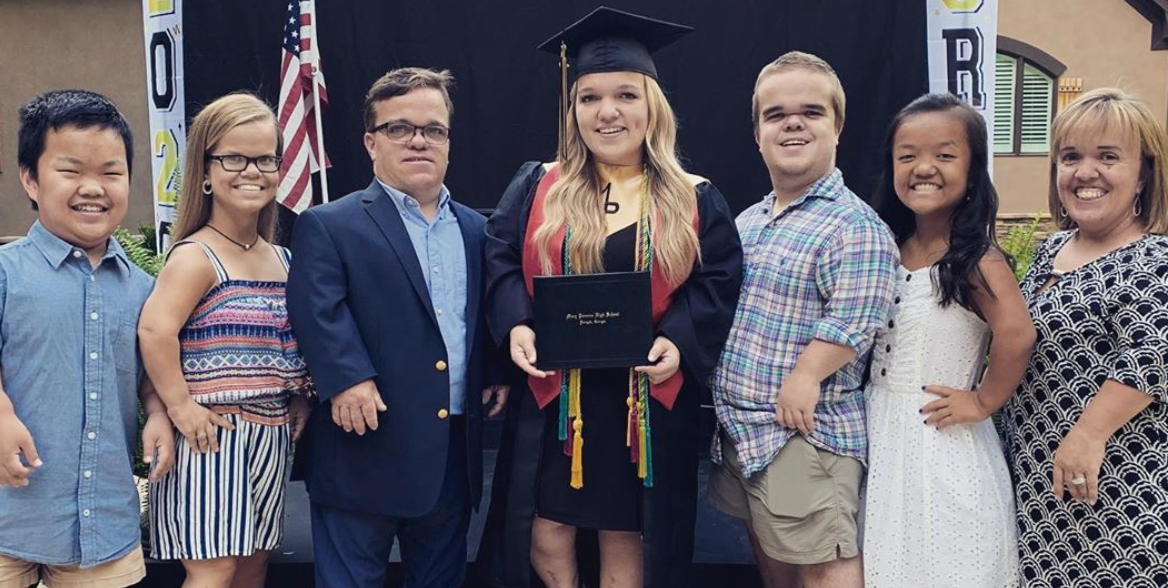 The current seventh season of 7 Little Johnstons has brought big strides for the group of kids in the family.  Recently, there have been wide swings of fan opinions on how parents Trent and Amber approached individual situations with each child.

In this week’s May 26 episode, School Rules, the whole family concentrates their efforts on creating a successful step into the school year.  Papa Trent still prefers the stern approach. But, the 7 Little Johnstons patriarch tempers his discipline with love in this one.

Last week was very emotional for Anna. She had some tortured feelings about leaving home for North Georgia Technical College.  This week, the camera was mostly on her other siblings. But, it was nice to see Anna laughing in the front seat with her mom. She was laughing over Alex’s idea of Emma being “a flyer” as a cheerleader.  She also gave Emma some ribbing over celebrating having a bedroom to herself and constantly talking with Luka.

Speaking of the sweethearts, they are officially “just friends,” because Emma is not allowed to date until she is 16.

Initially, Luka begged Emma to ask her parents to allow her to meet with her beau in person again.  Of course, she was thrilled. But, also predicted what the answer would be.

Since the two had just been together at the LPA convention, Amber explained that another visit so soon was not feasible.  She said that once Emma and Luka were older and dating, something could be arranged.  Emma was disappointed but accepting.  She related her feelings of being “fine with that” about not dating until 16.  She has many more responsibilities with classes, cheerleading, and other obligations. So, Amber thinks she will have less “Luka time,” too.

Emma and Alex step out into history

On this episode of 7 Little Johnstons, the youngest of the group tries out for the robotics team.  Alex is chosen as an alternate, and that seems fine with him. Amber delights in his commands for his little robots, but Cruiser, the puppy, isn’t too sure about having a nonhuman roaming the house.

Alex also goes back in time to become Franklin D Roosevelt for his history fair project.  He looks the part, too, as people stop by his booth. He guessed that he gave his presentation “nine or 10 times” through the event.

For Emma, her choice to become Malala Yousafzai was very courageous.  She had to give her presentation “over 10 times” as she proudly blurted to her parents. The reception from the public was a big confidence-booster for Emma who has struggled with communication.

Jonah asserts that “it’s on me”

Jonah has had a rocky year on the 7 Little Johnstons. But, the eldest son is determined to forge ahead in his future, and take responsibility for the outcome. He is headed into job-training instead of academics.

He felt very prepared at a “family table meeting.”  He showed Trent and Amber his schedule at the central Georgia vocational school where he is enrolled. Trent seemed to take over the conversation, wanting to know what a fallback plan was if Jonah did not succeed.  Clearly frustrated, the son left the table, saying it really didn’t matter “what they say” because he was going to take charge of his own success.

Jonah is starting at a new school after he flunked out of college. Trent wants him to have a backup plan, but Jonah thinks his dad needs more faith. Tune in to #7LittleJohnstons TONIGHT at 10/9c! pic.twitter.com/IWAu01JN8O

Amber explained in a profile interview that Trent often takes after his mother, who can be “harsh.” Later, Trent talks with Amber about not wanting to leave to situation “open-ended.” He wanted to let Jonah know that any time he needed help, the love and support would be there, “because I’m a big-hearted dad,” the father asserted.

Father and son took a walk to have the talk. More than a few times through the episode, Jonah insisted “it’s on me,” regarding his future success.  He seems to have put a lot of thought and personal investment into accountability.

Raising a teenager is no easy task for any parent, but the 7 Little Johnstons may soon be seeing their lessons reflected in the lives of their children.  That is the greatest reward of parenting, even though no one is perfect at it.

Next week will be the Season 7 finale of 7 Little Johnstons. The finale airs on Tuesday only on TLC.

Jill Dillard Shows Off Her Garden – Does She Have A Green Thumb?
‘Storage Wars’ Season 14: Canceled Or Renewed?!
‘Too Hot To Handle’ & ‘Love Island’ Premieres Will Battle For Views
Justin McSwain Says He’s Thankful For A Year Of Life – Interesting Photo
‘You, Me & My Ex’ Coming To TLC: Here’s What We Know So Far