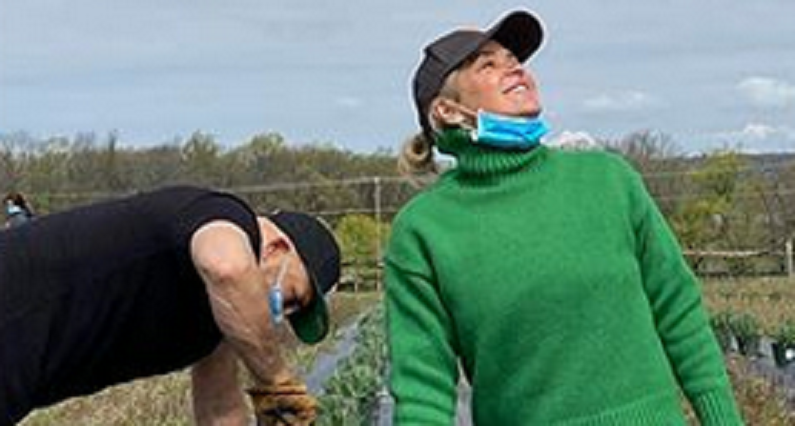 Yolanda Hadid is “very much in love” with her new boyfriend Joseph Jingoli. The couple has dated for 15 months. TV Shows Ace was one of the first outlets to report her new relationship. Now, the Real Housewives of Beverly Hills alum is sharing the details of their romance.

They found love on the farm together. It sounds like the plot of a paperback romance novel. But for Yolanda Hadid, it’s the real thing. The Bravo star currently lives on the East Coast to be closer to her boyfriend. Now, they only live “10 miles apart,” according to the former reality star.

Yolanda Hadid and boyfriend Joseph Jingoli are “very much in love”

In a new interview with Bravo’s The Daily Dish, Yolanda Hadid talked about her new boyfriend Joseph Jingoli. She’s so in love with him that she now lives full time on the East Coast to be with him. She lives just a few miles away from Joseph, who is the CEO of a construction and development company, per People.

“I don’t really want to talk too much about my private life, but yes, I have been in a relationship for 15 months and I’m very much in love with my boyfriend,” Yolanda coyly revealed in her video interview.

The couple found love on the farm together. Yolanda raises cattle, chickens, ponies, and other animals on her gigantic farm. She added that “what has connected us is probably horses and the farm life.”

On Sunday, May 24, Yolanda took to Instagram to post the following photo of her and Joseph riding horses in a beautiful field of yellow flowers. She captioned the post with a simple red heart emoji. Yolanda’s followers could feel the love bursting through the photo.

Her relationships have changed since leaving RHOBH

Yolanda Hadid has become a new woman since leaving the Real Housewives of Beverly Hills. She is not as close with her former co-stars because of her big move to the East Coast.

“I live on the East Coast full-time, right now on the farm,” Yolanda explained. “So I don’t see anybody anymore.”

But she doesn’t have any regrets. Yolanda said that she enjoyed being on the show with her former friends. While they had their differences, she feels they all moved past that. Yolanda still keeps in touch with Erika Girardi every “once in a while.” But it’s difficult due to the time difference.

Yolanda Hadid has a new outlook on life. And it’s all because of the new man in her life. Back in January 2018, Yolanda told People that she took a break from dating after her divorce from ex-husband David Foster. She wanted to focus on herself and her health. Yolanda and David split in 2015 and finalized their divorce in 2017. He is now married to Katharine McPhee.

Yolanda and Joseph started dating in 2019. An insider told E! News at the time that the couple were “set up by mutual friends.” Her life changed when they met. The Bravo celebrity said she started to focus on the things that matter.

“I really started focusing,” Yolanda said. “I made a love spiral and wrote down exactly what was important to me in a man and he magically just rang the doorbell at the farm.”

Nowadays, she’s learned to take things slow. She appreciates the beauty of life more. Aside from being “cute,” Joseph taught her how to “live in the moment, enjoy every day, and not wait.” They make sure to live out that motto every day of their lives.