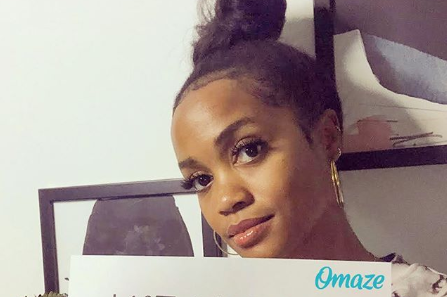 Rachel Lindsay of The Bachelorette went on Nick Viall’s podcast and talked about Hannah Brown. Lindsay had been vocal about reaching out to Hannah Brown after the reality star sang an offensive line on her Instagram live. Trying to remember a TikTok dance, Brown sang the words to “Rockstar,” by DaBaby using the slur as she did. At first, she said she didn’t think she’d said it. Later she released a statement apologizing, but before that, Rachel reached out to her about it.

Lindsay said she reached out to her directly and had multiple conversations with Brown about the situation. She wasn’t the only one to address this situation from Bachelor nation. Mike Johnson, Tyler Cameron, Bekah Martinez, and Nick Viall also had their own responses.

TODAY!!! I am excited to be part of the @detroitpistons Girls Dream Big Speakers Series: Women in Media & Entertainment at 2pmEST. Honored to share the panel with incredible women such as: @jemelehill @seauxsab @cupcakeshannon @hgolston @laurenwilli23 Swipe right, click the link on my stories or click the link below to register for this event! http://pistons.com/girlsdreambig

What Did Rachel Lindsay’s Conversation With Hannah Brown Look Like?

Rachel Lindsay told Instagram she reached out to give Hannah a chance to use her platform and correct her mistake. After she gave her the opportunity, Lindsay said she was, “personally hurt and offended,” according to E News. She said originally, Brown said she would apologize live.

Rachel said, “when Hannah and I talked, she wanted to know what my thought was as to what she should do. She said, ‘I want to ask you.’ And felt very remorseful.” Rachel said Hannah planned to go live and then she didn’t hear from her. Finally, she made a statement which Rachel found disappointing.

Lindsay said, “The reason it disappointed me so much that Hannah decided to give a statement is because—her words—’A statement would be insincere.’ Hannah said that. ‘It felt icky to give a statement,'” Rachel said she’d believed her and knew it was her team telling her to go for the statement.

What Did Hannah Brown Say In Her Statement?

Rachel Lindsay said Brown told her she would step up and she felt God wanted her to use her platform for a bigger purpose.  Lindsay said she felt disappointed later she let her know she would make a statement.

In her statement Brown said, “I owe you all a major apology. There is no excuse and I will not justify what I said. I have read your messages and seen the hurt I have caused; I own it all. I’m terribly sorry and know that whether in public or private this language is unacceptable. I promise to do better.”

Some critics said Lindsay didn’t support women because she supposedly bullied Hannah into apologizing live. She responded saying, “but what else do you see when you see me? I’m black! I’m black first and then I’m a woman…. It’s not about women supporting women. It’s about me representing myself as a black woman, and it is a derogatory term that is used against to oppress black people.”