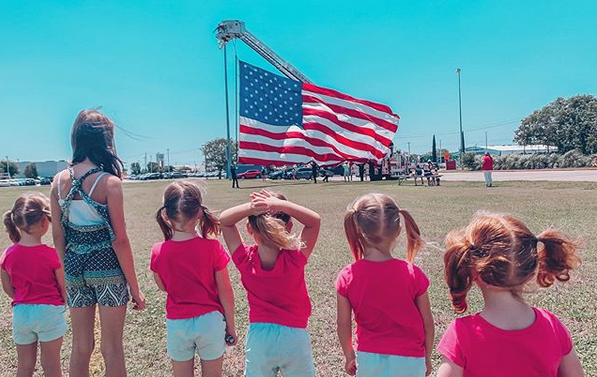 On a recent interview with Us Weekly, OutDaughtered stars Adam and Danielle Busby revealed that they are open to the idea of adoption. While they didn’t originally plan on having six kids, they’ve enjoyed the journey. The couple would love to adopt a son into their family sometime in the future.

The Busby family began when Adam and Danielle got married in 2006. Then, their first daughter, Blayke was born in 2011. Four years later, five more little girls joined the family. Adam and Danielle consider Blayke and the quintuplets, Parker, Hazel, Ava, Riley, and Olivia, a blessing. Because of the joy that their daughters have brought them, the couple admits that they’ve thought about adoption.

Adam and Danielle won’t have more of their own kids

In an earlier exclusive interview with Us Weekly released in June 2019, Danielle expressed that she and Adam didn’t want to have more children. She said, “It would be nice to have a little boy and carry on the Busby name here, but there won’t be any more children unless one day God put it on our hearts to adopt.” It seems that the couple has been talking about adoption for several months now.

In November 2019, Danielle got a hysterectomy. She has experienced a lot of pain since the quintuplets were born. Some days, she couldn’t do anything but lay in bed. This made it difficult for her to be there for her girls. After four years of dealing with the pain, Danielle resorted to having her uterus removed. This means that there’s no chance of the couple conceiving a seventh child.

In an Us Weekly exclusive interview on May 26, the interviewer asks Adam and Danielle if they’ve thought about adding to their family. Danielle explains that they can’t physically have another child due to her hysterectomy. However, Adam quickly adds that they wouldn’t be opposed to adoption. The OutDaughtered mother had previously mentioned wanting to adopt a boy into their family. Now, they discuss the possibility once more.

The Busby’s are a religious family and believe that six daughters was part of God’s plan for them. They wouldn’t have chosen to have quintuplets, but it turned out to be a wonderful experience for the family. So, Adam and Danielle are leaving adoption decisions up to God. Danielle tells Us Weekly, “If that’s something God puts in our heart and it’s something we get called and led to do, we’d follow that.” They explain that they’ll always keep an open mind to the idea.

OutDaughtered will resume with Season 7 on June 2 at 9 pm ET. Tune in to TLC to watch the season premiere and check in with TV Shows Ace for more updates on your favorite shows.