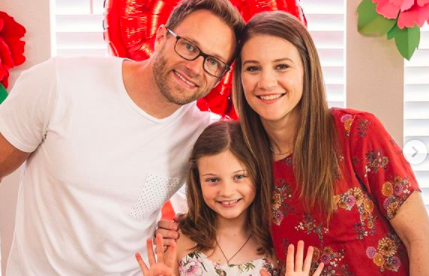 OutDaughtered stars Adam and Danielle Busby are joining parents across the country in the hard transition from caretakers to teachers. But unlike most families, they have a classroom filled with six kids. This unexpected promotion of course is a lovely result of quarantine and the coronavirus pandemic forcing children to school from home.

Adam and Danielle Busby opened up to Us Magazine , sharing their experience with the transition of parenting during a pandemic. Adam said, “We’re trying to figure out what we want to do…Do you want to school five preschoolers downstairs or one third-grader and try to teach her the math we didn’t learn when we were kids?”

Danielle went on to say that this experience just might erase any ideas she had for homeschooling the quints.

The OutDaughtered duo is proud parents to a 9-year-old named Blayke followed by 5-year-old quintuplets Ava, Hazel, Olivia, Parker, and Riley. For those who do not know, Adam and Danielle Busby received their TLC deal when they became parents to the only all-girl quintuplets in the United States on record. Their series began in 2016 and they are now getting ready to begin Season 7.

Thankfully not all the children are in school yet

The OutDaughtered stars went on to express just how grateful they are that their youngest girls have not yet started kindergarten.

Danielle said, “That would have been another level of homeschooling.” She went on to share that their daughter Blayke is in third grade, so her homeschooled days are very structured and filled with a routine. Blayke is very good at respecting their authority as the school teachers. But, with the quints it is very different. Since those five girls have not yet attended official schooling they do not have the same discipline and practice that their older sister Blayke has.

Danielle further explained, “They [behave] at school probably way better than they do [with] us as teachers. That balance of trying to get them to focus … is tough.”

The Busbys still make time for fun at home

Despite the difficult adjustment to quarantine life for the bustling Busby family, they are still making it a point to have fun and make family memories.

Us Magazine continued to report that the family is getting plenty of ideas from Pinterest to keep things interesting. They have done activities such as tie-dying, playing with chalk, and even learning about their local leaves.

The Outdaughtered mom wrapped things up saying, “Thankfully, we have the yard and we go on bike rides. We’re doing two-a-day bike rides in the morning and in the evening. As long as the weather’s good, we’re trying to be outside.”

What do you think of the OutDaughtered parents having to teach one and care for so many young kids at home? Let us know what you think in the comments below. Be sure to watch Season 7 premiere of Outdaughtered on TLC Tuesday, June 2, at 9 p.m. ET.