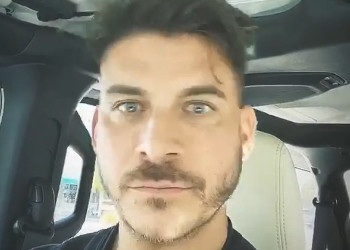 Vanderpump Rules star Jax Taylor and Ariana Madix had a confrontation during the Season 8 Finale on May 20. Ariana expressed her frustration with Jax constantly attacking her relationship with Tom Sandoval.

If fans thought the issues were resolved between the two, the tension was reignited during the After Show. Jax slammed Ariana as “mean” and “aggressive.”

She suggested he seek professional help for his issues.

Jax Makes it Clear How He Feels About VPR Co-Star: ‘I Just Don’t Like Her’

During the Vanderpump Rules: After Show, Jax made no bones about his feelings for Ariana. He says outright that he “dislikes” her.

Jax feels that Ariana expresses disinterest in anything that doesn’t involve her. He calls her “mean” and “aggressive.” And, “I just don’t like her.”

When it comes to the show, the VPR star has said several times that Ariana and boyfriend Tom Sandoval ‘fake’ things for the camera. Jax repeated this on the After Show. He says,

She will only talk about what makes her look good in the limelight. I personally don’t think she brings anything to anyone’s life.”

In case you aren’t sure how he feels, he then said he finds her to be “very negative.” And “I just don’t like the person she is.”

Jax may not like Ariana, but his SUR boss does. Lisa Vanderpump stuck up for Ariana after Jax’s vent session.

Lisa Vanderpump Defends Ariana, But Jax Isn’t Having It

When the After Show films, the VPR stars chat with producers, often in groups. During the May 20 show, Lisa Vanderpump sat next to Jax. The others were in their own groups.

Lisa immediately jumped to Ariana’s defense after Jax said he didn’t like her. The former RHOBH star gave Ariana props for being “very honest” with her struggles during Season 8. As fans know, Ariana detailed her depression, even saying at one point that she’s contemplated suicide.

However, Jax wasn’t having it. He clapped back that it took “years” for Ariana to let viewers in, Reality Blurb reports.

One fan took to Twitter to verify Jax’s contention that he is the “number one” star of VPR. The fan noted that Jax is the only one in the seat of honor next to Lisa.

Jax retweeted with his own comment. He writes that he and Lisa “called out other people’s bulls**t that day.”

This was actually really fun… we called out other people’s bullshit that day. https://t.co/0H7jRAXJcB

Ariana Claps Back, Implies Jax Tears Down Others to Make Himself Look Good

While Ariana couldn’t comment directly on what Jax said on the After Show, she did comment on the Season Finale chat. She reveals that she went into the chat with the mindset of encouraging him to “see a professional” for his depression.

The Fancy AF Cocktail author said that Jax’s behavior is “not okay” and she’s “not down with it.” Furthermore, Ariana suspects that Jax tears down other people to make himself look good. She says,

In his eyes, the only way that he looks better is if he makes other people look worse.”

So, tell us in the comments if you think Ariana is right about Jax’s attacks.

You can watch the full After Show interview at Bravo TV.

Vanderpump Rules still has four new episodes to go before Season 8 is over. Secrets Revealed airs May 26. The following week, June 2, the three-part reunion starts. Check out the reunion trailer below.