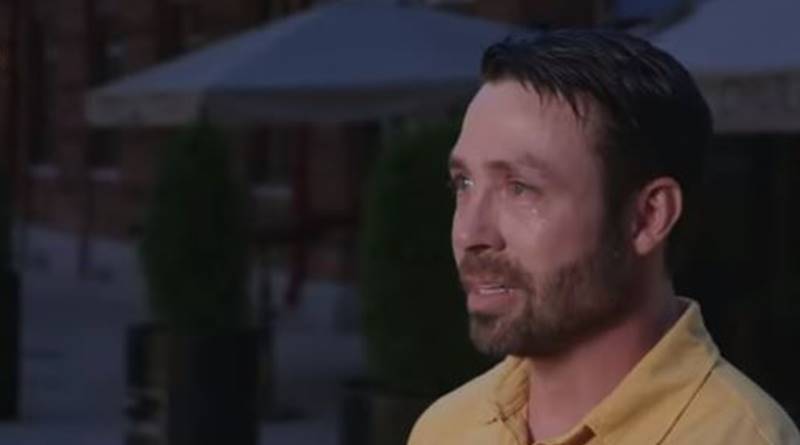 90 Day Fiance fans know that Geoffrey Paschel can’t wait to get his abuse allegations heard in court. He promised that he’d reveal the truth as soon as he can to clear his name. But, he now addressed the other issue that worries him even more. Accused of “killing” his child, or of “child abuse,” he now revealed the truth in a video. And, he backed it up with extracts from official records.

90 Day Fiance – Geoffrey shares the real story about his son, Kazhem, who died

TV Shows Ace reported that Geoffrey gets attention from haters and trollers because he faces a court case. That court case revolves around allegations that he physically abused his ex-girlfriend. Delayed again, he feels frustrated. All he wants is to clear his name. In the meantime, he also gets terrible hate as his son, Kazhem died as an infant. On his YouTube, Geoffrey noted that trolls “accused [him] of abusing” and “killing” him.” He added, “This is one of the most ridiculous and hurtful experiences of my life outside of his actual death.”

As the 90 Day Fiance star can’t “grieve in peace,” he told the full story. And, he backed it up with, “official medical records.” Many fans who saw the video about the death of baby Kazhem felt heartbroken. Then, on his Instagram where Geoffrey announced the YouTube video, fans spoke out against the cruelty of haters. However, in fairness to them, tabloid media helped spur on the rumors with sensationalized headlines.

How did Kazhem’s symptoms start?

YourTango noted, “According to reports, Kazhem was admitted to the hospital in February 2018, due to seizures and he died in March of that year.” However, he previously got admitted at about 3 months old. Critics assume the child died in his custody because Geoffrey did something to Kazhem. In his new reveal, Geoffrey produced some extracts of the custody case. His ex-wife, Brittany left him and took Kazhem with her to Canada. But, after many hearings, a judge ruled Geoffrey could take custody back. Kazhem passed away while in Geoffrey’s custody.

In his video, which you may watch in this article, Geoffrey noted that before his wife absconded with the kids, they took Kazhem to doctors. Nobody could fathom what ailed the child. When his son died, he reached the age of just 13 months. While visiting a “local theme park,” Geoffrey noticed his baby’s eyes “started to cross.” Much younger at that stage, thinking he did it deliberately, Geoffrey even shared a photo. However, they remained crossed and he felt some concern. The 90 Day Fiance star noticed when they lay him down, he turned “red” and became distressed.

The doctors called an ambulance

Taking Kazhem to the doctor the next day, an ambulance got called straight away. The doctors couldn’t say what ailed the little boy. Suspecting meningitis or some sort of “mosquito illness,” Kazhem ended up at a children’s hospital. Puzzled, the doctors even wondered about “optical nerve damage” or other “brain issues.” Many tests got performed, and suddenly Kazhem “snapped out of it.”

The 90 Day Fiance star then shared documents about Brittany who the border police detained with the kids. After the first medical scare, she took off with them a few months later. The end of that story meant that Kazhem went back to his dad after a judge ruled in his favor. Geoffrey produced messages that showed he communicated about the kids with their mom. “Everything was fine,” he said. But, she showed little interest in “co-parenting.”

In February, Geoffrey left Kazhem with his new girlfriend while he went to work. Kazhem experienced a seizure. Geoffrey rushed to the hospital. But after a couple of days, he seemed back to “normal.” Doctors talked about releasing him from the hospital. However, he experienced another seizure. Doctors “pumped” him up with meds and said he might sleep for about 24 hours. Doctors moved Kazhem into critical care and examined his eyes a lot.

The 90 Day Fiance star started crying as he described that one nurse looked into his baby’s eyes and then ran out. “A whole team of people came in,” Geoffrey recalled. Geoffrey hoped his son would “come out of it,” but “he didn’t.” Geoffrey got Kazhem’s mother there, saying, “I fought for her to come down.” But when she arrived, she accused him of abusing the baby and leaving “opiates” lying around. But doctors thought it was more related to “congenital seizures.” They assured her they always check children for trauma. But they saw no signs of abuse.

Brittany nevertheless, insisted on an investigation, but again the conclusion showed no abuse by Geoffrey. In the end, the doctors allowed Geoffrey to hold his son. “They turned off the ventilator, and he died in my arms,” Geoffrey said. The medical examiner said the cause of his death is largely unknown. But, they know he suffered “febrile seizures,” which caused “complications.” Nobody knows for sure why he died.

The 90 Day Fiance star noted Brittany fought for cremation, even though that would “destroy” any evidence of her allegations of “abuse.” Geoffrey won the case and eventually his son was buried in a cemetery in Tennessee. Heartbroken fans, now convinced of the truth of it, responded on YouTube. One commented, “I am Broken-hearted watching this. You are so strong to share Kazhem’s story. I hate that you went through such a terrible loss and you have these *ssholes trying to accuse you of BS. You can tell you had so much love for your baby boy 😔.”