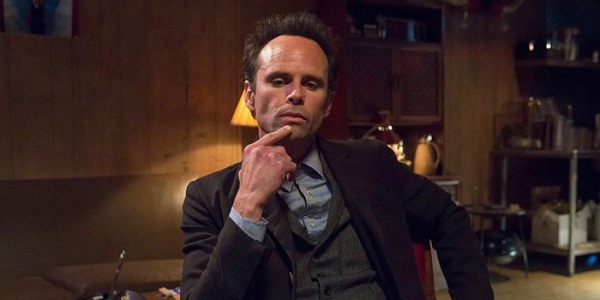 Actor Walton Goggins is poised to take us to the great beyond with Discovery and Science Channel on Monday, May 25 and Tuesday, May 26. The award-winning actor is the voice of Discovery’s multinetwork documentary airing that will bring the unprecedented space travel up close and personal.

Ths rare glimpse behind the scenes is a first, and Goggins will serve as narrator as we approach the launch of SpaceX’s Crew Dragon capsule coming early next week. As narrator, Goggins will take viewers along the journey leading up to the launch, noting the engineering and scientific feats that were achieved, and offering viewers unprecedented access to NASA and SpaceX headquarters.

The two-hour documentary traces SpaceX’s journey to be first and gives viewers all the pertinent details ahead of the launch that will be captured in the networks’ multi-platform event, Space Launch Live: America Returns To Space which will simulcast live coast to coast on Wednesday, May 27, at 2 PM ET/11 AM PT on Discovery and Science Channel.

Who is Walton Goggins?

Fans know Goggins from his days on Kurt Sutter’s The Shield and a cameo as a transgendered call girl Venus Van Dam on Sons of Anarchy, to another FX hit series, Justified, cast as Boyd Crowder. As Boyd Crowder, Goggins defined and perfected the cagey Southern outlaw villain role.

His roles flourished on HBO with actor and showrunner Danny McBride, as Goggins was cast with him on the HBO comedies Vice Principals and The Righteous Gemstones starring McBride.

Goggins won the 2018 Critics’ Choice Television Award for Best Supporting Actor in a Comedy Series for his role as Lee Russell opposite McBride. He also starred in History’s Six and is the star and producer of CBS’ The Unicorn.

What happens during the NASA documentary?

Discovery and Science Channel will document history in the making at the NASA launch of Space X’s Crew Dragon Capsule on Wednesday, May 27 from the Kennedy Space Center in Cape Canaveral, as the networks confirmed today that Walton Goggins is the narrator for the upcoming documentary, NASA & SpaceX: Journey To The Future.

The special 2-hour documentary will air Monday, May 25 at 9 PM ET/PT on Science Channel, and will rebroadcast on Tuesday, May 26, at 10 PM ET/PT on Discovery.

Goggins will lend his voice to the 2-hour documentary that takes viewers behind the scenes of this historic launch.

The live broadcast gives unprecedented access to the historic mission, known as Demo-2, which marks the first crewed space mission to be launched into orbit from U.S. soil since 2011.

The documentary will also profile SpaceX Founder and Chief Engineer, Elon Musk, who will  discuss this momentous space achievement.

“With first-hand accounts from Elon Musk, Astronauts Bob Behnken and Doug Hurley, as well as NASA Administrator, Jim Bridenstine, the documentary reveals the behind-the-scenes action with the teams of SpaceX engineers, NASA employees and scientists as they fulfill the SpaceX mission to “fly, test, and fix” their way to the ISS – with the goal of eventually flying to the moon and to Mars.”

Goggins is an Emmy nominated actor and Academy Award winning filmmaker who will lend his voice to document this epic achievement in space history and tell viewers how SpaceX’s race to become the first private company to launch American astronauts into space went down.