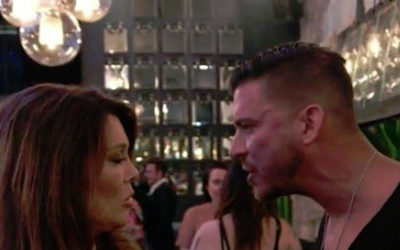 Vanderpump Rules star Jax Taylor channeled his inner Vicki Gunvalson on the Season 8 finale on May 19. During an argument with boss Lisa Vanderpump, Jax called the Bravo show HIS show. Queen Lisa quickly shut him down with a long-overdue verbal dressing down.

Bravo fans may recall Vicki telling newbie Braunwyn Windham-Burke to “GET OFF MY SHOW” at the RHOC Season 14 reunion. Vicki wasn’t asked back for another season, while Braunwyn will return for Season 15.

Could Jax suffer the same fate? Probably not, as Lisa always gives him a pass eventually. But, Bravo fans were certainly here for Lisa putting Jax back in his place.

Season 8 Went Downhill For Jax After Wedding to Brittany Cartwright

The first half of VPR’s Season 8 lead up to Jax’s wedding to co-star and fianceé Brittany Cartwright. The wedding was spread out over three episodes, spreading thin the patience of fans.

Once the wedding was over, Jax fell in a depressed slump. He went so far as to regret marrying Brittany so quickly, further outraging fans.

Toward the end of the season, Jax fought with pretty much everyone, including former fling Kristen Doute. His arguments spilled over to Brittany’s friendship with the other VPR cast members.

For her part, Brittany stayed loyal to Jax, TV Shows Ace reports. Things went too far in the May 13 episode when Sandoval and Jax had dueling pool parties, forcing the cast to take sides in their feud.

Spoiler: Most sided with Sandoval.

Brittany slammed Sandoval for being “petty” by hosting a pool party on the same day as Jax. However, everyone Sandoval invited was disinvited from Jax’s party via rage text.

Jax and Sandoval butted heads from the very first episode of Season 8. Jax felt slighted because Sandoval couldn’t attend his pre-Bachelor-party party. Things between the former close pals only got worse from there.

It got so bad that Jax stripped Sandoval of his Best Man duties and disinvited him to the wedding. Thanks to VPR co-star, Stassi Schroeder, cooler heads prevailed. While Sandoval did stand up next to Jax at the wedding, Jax has publicly expressed his regret.

Things were made even worse by Jax slamming Sandoval and Ariana Madix in interviews, on social media and everywhere in between.

During the Season 8 finale, Sandoval and Jax agreed to take a “break” in their friendship. Lisa overheard the entire exchange and tried to intervene with Jax, E! News reports.

The issues with Jax and Lisa began earlier in the episode. During a cast photo at Lisa’s home, Jax showed up wearing the wrong shirt. He said in his one-on-one interview that he isn’t on the “same level” as the other bartenders. According to Jax, he can “wear what I want, when I want.”

Lisa did not agree. She tried to get to the bottom of why Jax has been so upset. However, he brushed her concerns off.

When Lisa overheard Sandoval and Jax end their friendship, she tried to talk some sense into Jax.

However, Jax wasn’t having it. He went off on Lisa about how his friendships are real, not just for the cameras. At this point, Jax took credit for the entire show. He said, “This is why my show is successful…”

Lisa immediately cut him off and put him back in his place by saying,

It’s actually not your show, it’s actually my show, ok? And, I put your a** on it, so don’t be f**king disrespectful to me.”

A frazzled Jax tried to say that he wasn’t being disrespectful, but Lisa wasn’t having it.

She told the VPR star to seek help before he lost his “beautiful wife” like he’s lost his closest friend.

At least until the Season 8 reunion.