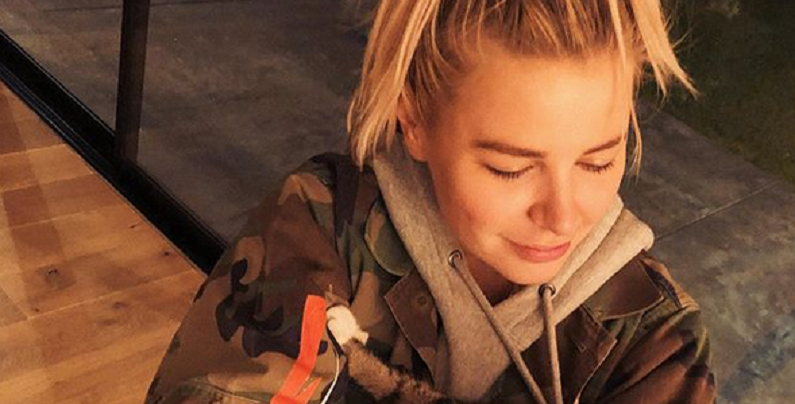 Ariana Madix and Tom Sandoval took the next step in their relationship. The Vanderpump Rules couple has expanded their family. No, they didn’t decide to have kids. However, the couple introduced a new fur baby into their family.

Back in April, they introduced followers to the newest furry member of their family. However, they didn’t know what to name her. Now, it looks like the couple has finally settled on a name. During her Monday, May 18 Instagram Story, Ariana Madix announced their pet’s name.

Vanderpump Rules star reveals the name of their newest dog

According to The Daily Dish, Ariana Madix shared the name of their newest pet on her Instagram Story. She said that their dog’s new name is Mya Moon Madix. Ariana posted a photo of the white and gray mix laying on their bed. “Once upon a time, I had my own pillow,” she wrote in the caption. Also, she tagged the new Instagram account for their beloved pup in the post, @mya.moon.madix.

One look at Mya’s Instagram account and it’s filled with photos and videos. The first post shows the dog sitting in the sunlight with the caption, “Hi! My mom made me my very own Instagram page! Nice to meet you. Can’t wait to share my story.”

hi! my mom made me my very own instagram page! nice to meet you 🌙 can’t wait to share my story 🌙

And, there is a photo of Mya snuggling with Ariana’s dog Charlotte York. The dogs are seen lying back-to-back.

me and my big (little) sis @charlotteyorkmadix 💖

There’s also a photo of Mya snuggled next to Tom Sandoval. “Me and dad. Ppl say we have the same smize,” she wrote in the caption.

me and dad. ppl say we have the same smize 🥰

Plus, there’s a video of Ariana playing fetch with Mya in the backyard by the pool. Tom and Ariana threw an epic pool party on a recent episode of Vanderpump Rules. It looks like Mya’s enjoying her new digs.

love playing fetch with mom in the yard!

Why Ariana Madix and Tom Sandoval didn’t have furniture

Vanderpump Rules Season 8 had plenty of drama. One of the storylines centered around the couple’s furniture or lack thereof. Some cast mates slammed Tom Sandoval and Ariana Madix for their furniture-free lifestyle. Danny Pellegrino, who co-authored the couple’s cocktail book, Fancy AF Cocktails, provided viewers a reason why they didn’t buy furniture right away, per People.

“I get it’s not as funny as them not having furniture, but one of the reasons Tom & Ariana waited to order their custom pieces was so that we could shoot over 80 photo setups for #FancyAFCocktails in their house,” Danny tweeted during the show’s season finale.

I get it's not as funny as them not having furniture, but one of the reasons Tom & Ariana waited to order their custom pieces was so that we could shoot over 80 photo setups for #FancyAFCocktails in their house. #pumprules @ariana2525 pic.twitter.com/mxokgNrElS

Then he shared a behind-the-scenes video from the shoot. He said that the space was needed to allow their book’s photo shoot to come to life. It may not have happened if there was furniture  around.

“I know some people are saying ‘just move it when you shoot,’ but 80+ photo setups over a week is a LOT,” Andy tweeted. “It’s not economical to bring equipment IN/OUT, and there isn’t space to just move it to another room.”

Ariana and Tom defended their furniture-free home all season. But, they received remarks from Lala Kent and Katie Maloney-Schwartz.

The couple virtually appeared on Watch What Happens Live with Andy Cohen.  They showed off their new stylish furniture. And, to top it all off they’ve been working with an interior designer.