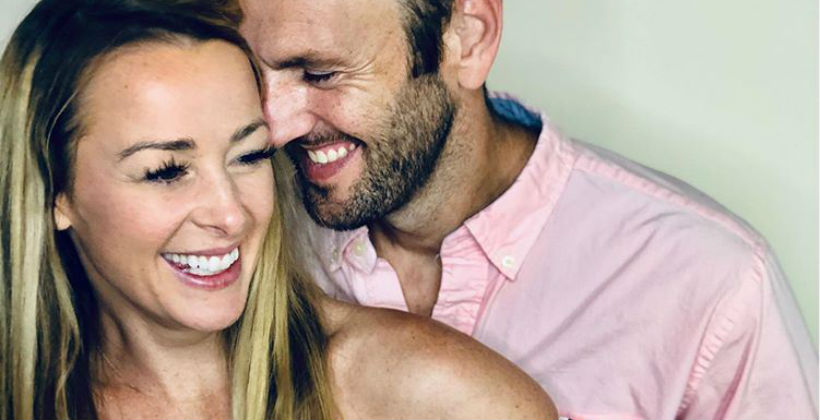 Married at First Sight alums Jamie Otis and Doug Hehner welcomed their son Hendrix Douglas on May 13. He’s just over a week old and the couple is already talking about their next pregnancy. They want a more kids and it sounds like they will be trying again sooner rather than later for another baby.

Jamie and Doug talk having another baby

In Touch Weekly caught up with Jamie and Doug and asked them some questions that may surprise fans. While Hendrix is only a week old, Jamie and Doug are talking about the next addition. Doug says he really thinks in about a year they will be trying again.

Jamie stops him and says, “More like 6 months. I am pushing 34, and at 35 you are considered ‘advanced maternal age’ … which is considered high risk. We want to have at least two more children of our own and, with our past, I would love to be able to start trying ASAP so if we need any help we can get it.”

Jamie and Doug have shared they want a house full of kiddos running around. Recall they lost their first son, Jonathan, when Jamie was only 17 weeks pregnant. They then had their daughter who is now 2. She then suffered two more miscarriages prior to becoming pregnant with Hendrix.

WE HAVE A BIG ANNOUNCEMENT!👶🏼🌈💙 We changed our sons name. We filled out his birth certificate & have officially changed it from Hayes Douglas to Hendrix Douglas.🥰⁣ ⁣ We couldn’t decide between Hayes and Hendrix our whole pregnancy.😬 We ended up going with Hayes, but the moment I pushed him out & brought him to my chest I almost blurted out, “Hendrix!”☺️⁣ ⁣ My whole pregnancy we struggled finding the “right” name for our precious baby boy. We had @sj_strum who’s a baby name expert from Europe come on our podcast and share some names and meanings … she revealed to us that Hendrix is loosely tied to Johnathan.👼🏼⁣ ⁣ As many of you know, our first born son’s name is Johnathan. I delivered him at 17 weeks & he went straight to heaven to be our little angel watching over us from above.🙏🏻⁣ ⁣ I never used to believe in spirits really, but I know in my heart that Johnathan is with us …I mean, I can *feel* him and he sends so many signs.👼🏼💙⁣ ⁣ This first photo was one of the last ones I had with Hendrix in my belly…it wasnt a “professional” shoot – it was just taken in our backyard. You can see the light shining down from above directly over my belly.🤰🏼⁣ ⁣ Then the second photo was on our baby moon. The day we woke up for our maternity shoot there was a double rainbow!🌈🌈 we couldn’t even believe it! Since I lost two pregnancies prior to conceiving Hendrix, he is considered a double rainbow…and rainbows always remind me of Johnathan.⁣ ⁣ The last sign was the day I was due with Hendrix. I had to go to the midwife for a check up and on the way home there was a random rain storm that had a rainbow! I was driving and couldn’t snap a photo but I wish I had just pulled over to grab one!🤦🏼‍♀️ It was so incredible!🥰 I mean, what are the chances?!⁣ ⁣ I could chalk it up as coincidence, but I really don’t think so! Call me crazy, but I know our angel baby sent us this sweet rainbow baby. He’s telling his parents he’s been watching over Hendrix (and Gracie) and will continue to do so.😭🙏🏻👼🏼⁣ ⁣ We are so happy to honor our angel baby & name our newborn son a name that is affiliated with his….even if it is in a very uncommon way.👶🏼💙🌈⁣

They talk about their new show

The Hehner’s have a new show coming to TLC. Jamie and Doug’s new show Married At First Sight: Couples’ Cam premiered May 20. They shoot the show themselves and they promise to deliver raw footage to fans. They both feel the show will be more real than other reality TV shows out there.

The show will feature their life as it is. It will even include footage from Jamie’s home birth last week. And while they go through quarantine together, things aren’t always puppies and sunshine. Jamie admits the two are like any other couple and have their good and bad moments. However, it has all made her slow down some.

She said, “I learned how important it is to slow down and soak up the moments because they are fleeting. I still don’t want to paint the picture that we’re over here filled with rainbows and sunshine while trying to work from home with a toddler in the midst of a pandemic. It definitely has its moments as well, BUT, there’s not a doubt in my mind we wouldn’t have been able to have all this quality time together if the government didn’t force us to stay home. For that I am thankful.”

Stay tuned for more information on Jamie and Doug and their growing family.