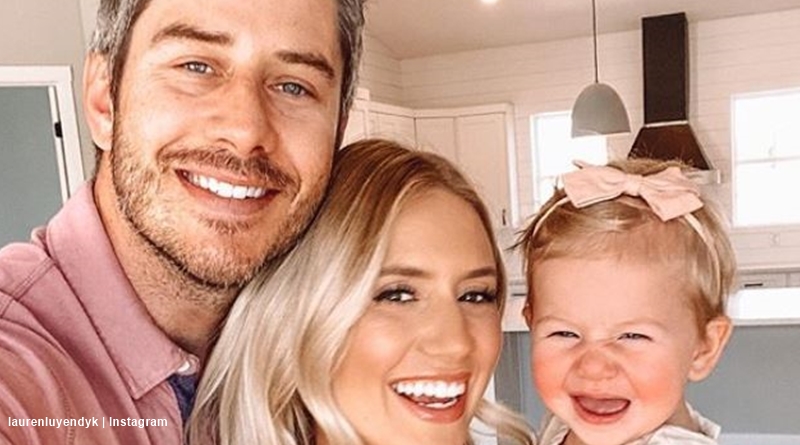 Bachelor stars, Arie Luyendyk and Lauren welcomed their little girl, Alessi in May last year. In another week or so, she turns one-year-old. Born on May 29, the cute little girl has reached an adorable age. Now, they updated fans on all her milestones. Parenting seems something the couple enjoys, as they also talked about more kids.

TV Shows Ace reported that Arie and Lauren Luyendyk discussed more kids in their lives. Mind you, Lauren battled with eating for two and packed on the pounds. Next, time, she feels determined to work that out a bit better. It seems that too many desserts like ice-cream brought way too much temptation. Now back to normal, as they want more kids, Lauren intends doing a bit better. With no pregnancy announcement, fans need to wait a while for a new baby though.

Meanwhile, on her Instagram, Lauren startled fans by sharing a throwback photo of Alessi. For a moment or two, some fans thought the Bachelor star already birthed baby number two. As Alessi’s birthday approaches, Lauren explained, “I’m planning Alessi’s 1st birthday + now all of a sudden I’m stuck in a rabbit hole of newborn pics of her. My heart can’t take itttt.” Fans responded enthusiastically to Lauren celebrating Alessi’s first birthday. Hopefully, she shares plenty of photos of the big day.

I’m planning Alessi’s 1st birthday + now all of a sudden I’m stuck in a rabbit hole of newborn pics of her. My heart can’t take itttt #llxgi

US Weekly caught up with the couple and they talked about their daughter. Lauren joked that while Alessi already says “Dada,”‘ she failed with “mama.” Surprisingly though, Alessi manages the word “turtle'” and makes an effort with “birdie.” But Lauren joked, I swear, she’s going to be two before she says “mama.'” Meanwhile, Arie loves the “exciting” age Alessi reached.

He told the outlet, “She’s learning something new every day…She’s so close to walking on her own, and every day is something fun and new.”‘

Lauren also spoke about the coming birthday party. Fans wondered about that on the Bachelor alum’s Instagram post. One fan said, “What are you doing for a party? I’m in AZ too and my baby was born 2 days after Alessi. I don’t know when is an acceptable time to host a party with this quarantine going on, but I can’t skip this milestone first birthday party.” When Lauren spoke to US Weekly, she suggested they might have a few “friends” or her “grandparents” over.

However, things may have changed since then. Replying to her fan on Instagram, The Bachelor alum noted, “we’re setting up stuff for her as if she’s having a party.” But, she said they won’t invite “people.” Lauren added, “it’s such a weird time, but she probably won’t remember it anyway. lol.”

Remember to check back with TV Shows Ace often for more news about Arie and Lauren of ABC’s The Bachelor.