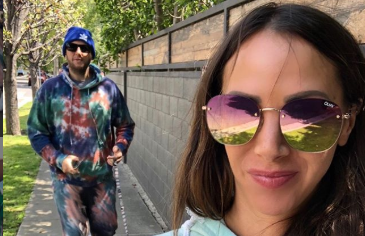 Kristen Doute of Vanderpump Rules is telling all in her new book. In, He’s Making You Crazy, she covers her former relationships many of which VPR fans know a lot about.

Doute said the chapter that was the hardest one to write was the one about Jax Taylor. Kristen said, “I don’t say the names, but I just want everyone to know that did not happen with another person.”

She said she thinks it will be obvious who it’s about. She also said there is a lot of guilt over the mistake she made. Kristen Doute put some very personal stories and revelations in her book.

During Season 2 of VPR Kristen Doute told Stassi Schroeder she slept with Jax Taylor when he was trying to get his ex back. Stassi and Jax had a volatile relationship as one of the first Vanderpump couples fans met in Season 1. Doute was dating Tom Sandoval. They also weren’t without issues, Kristen got angry when she met someone he slept with in the past at a photoshoot.

Kristen said she wanted to explain where her head was at when it happened. She said, “you know what, I’m not blaming him for this, I’m actually taking the heat for it.”

The book is coauthored by Michele Alexander who wrote, “How to Lose a Guy in 10 Days.”  She called the affair with Jax her own, “scarlet letter.” Kristen said people are going to remember it for a long time.

She Gave Her Co-Stars A Heads Up

Kristen Doute thinks the rest of the VPR crew has let go of her past indiscretions. She says the frustration is when other people bring it up. Jax went on to marry Brittany Cartwright and Tom is with Ariana Maddix. Kristen said she told both women she’d be talking about their men in the book. Doute said both women gave her their blessing to do what she had to.

Ariana and Kristen are actually friends now while her relationship with Stassi is strained for other reasons. She talked about her and Ariana’s friendship in the book. Kristen said, “she and I are so, so close now. It’s been so many years. There was such a temperature change I feel when she and I were no longer, like, salty toward each other.” She said VPR never acknowledged the change and it was an important transition according to US Weekly.

Doute said, “I didn’t ask permission from anyone because essentially they’re my stories and I gave myself that right to write how I felt.” Kristen’s book comes out June 2 and is currently available for pre-order. There’s no doubt fans will be buying it to find out all the hot gossip.