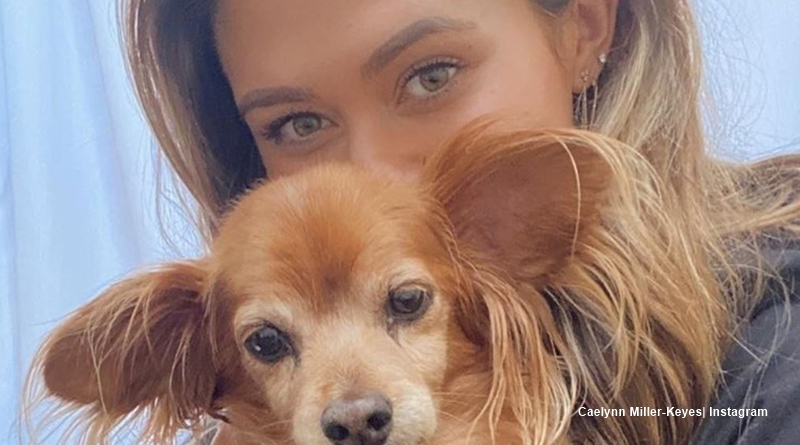 BiP fans wouldn’t know that Caelynn Miller-Keyes suffers some “heaviness” during the coronavirus pandemic. On the surface of it, she looks and acts just fine. In fact, Bachelor in Paradise fans saw her go out of her way to make Dean Unglert’s birthday special. And, it’s obvious she really loves their rescue dog, Pappy. But, like most people, under it all, there’s stress and discomfort for Caelynn. She credits Dean and Pappy for helping her deal with this difficult time.

TV Shows Ace reported that Caelynn went all the way when it came to Dean’s birthday. From the outside, it seemed that she reached out with love and positivity for Dean. She made him breakfast in bed. Later, they enjoyed a special meal in a cozy nook. Plus, she built a fort where they snuggled up and watched movies. Additionally, she featured Pappy the rescue dog in her vlog.

Fans might recall that Pappy, an elderly dog initially went home with the couple as a foster dog. But later, despite his many health issues, Dean and Caelynn adopted him. Since then, they traveled together all over the place and sat out quarantine alongside their pooch. While Caelynn reached out with positivity towards Dean and Pappy, it seems it’s no one-way street. The BiP alum spoke to US Weekly about that.

Dean, Pappy and ‘heaviness’ during quarantine

Talking to the outlet about coping with the COVID-19 “heaviness,” the Bachelor in Paradise alum said, “It’s tough.'” But luckily, Dean’s with her during the quarantine. Caelynn described him as “the most positive person I know.”

He helps her keep her spirits up when she feels a bit bleak. But obviously, she also tries helping herself, as well. Caelynn mentioned that she decorates, takes long walks, and lets her “creative” side out. Then, she also “listens to podcasts” which help clear her head.

However, that cute little old man, Pappy the rescue dog, really seems to have stolen the BiP star’s heart. Fans who hoped Pappy found his forever home need not worry it seems. Caelynn credits the little Yoda-lookalike with helping her cope with “heaviness.”

She told US Weekly, “Having Pappy helps too. Whenever I start to get upset, I just look into his sweet eyes,” she said. Notably, Pappy keeps both BiP stars “entertained.”

Fans know that Pappy suffered from tooth issues. But Caelynn said they got that fixed up and now his “new personality traits” emerge.

Our sweet boy is out of surgery and (pretty much) toothless. He only has 2 teeth left, but he’s as perfect as ever, and will be back to his silly self soon! ❤️

What do you think about Caelynn finding comfort and positivity from Dean Unglert and rescue dog Pappy during the quarantine period? She probably never realized how much joy Pappy would bring when they fostered him. And, Dean and Caelynn really came as a surprise success to BiP fans.

‘RHOBH’ Fans React To ‘The Housewife & The Hustler’ Premiere
Did You Miss This JonBenet Ramsey Reference In ‘Cruel Summer’?
Wait, Is ‘Storage Wars’ Season 13 Over Already?!
‘LPBW’ Matt Roloff Making The Rounds Like A Rockstar
New Series ‘Love In Paradise’: Is It Just Another ’90 Day Fiance’ Spinoff?