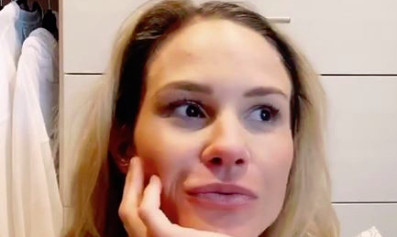 The Real Housewives of Orange County star Meghan King has a new man in her life. Meghan split from her husband, Jim Edmonds, in late 2019 after five years of marriage. While Jim has moved on with a new love, Meghan has been focusing on the three young children she shares with Jim.

The former RHOC star co-hosts a podcast with Dancing With The Stars alum Brooke Burke. Meghan has been open on the Intimate Knowledge podcast about her dating life. Or lack thereof. It wasn’t until almost six months after her split that Meghan was open to dating again.

At the end of March, the RHOC star dished on Facetime dating amid the quarantine lockdown. Is it possible that the man she was Facetiming is now her boyfriend?

Then Deleted Dating Apps From Her Phone

A month after dating on Facetime, Meghan deleted all of the dating apps on her phone. TV Shows Ace reports that the RHOC star decided to focus on herself.

She admitted to Brooke that she wants to be in a relationship. However, it didn’t seem in the cards for her at the time.

What Do We Know About RHOC Star’s New Boyfriend?

What a difference a month makes! It was in mid-April that Meghan gave up on dating apps. News broke on Monday, May 18, that the RHOC star has a new boyfriend in her life. According to Us Weekly, his name is Christian Schauf.

Meghan’s new man lives in Park City, Utah. Which is exactly where she spent her weekend.

Therefore, it’s not surprising that he is super outdoorsy. His Instagram feed is full of photos of him biking, skiing and other outdoor adventures. All with his four-legged sidekick.

Barron, a Swiss Mountain Dog, is the official mascot for Christian’s company. You can see Barron’s Instagram here.

Us Weekly reports that the new couple started dating in March.

The magazine also reports that Meghan took off to Utah with Christian. Her three young children spent the weekend with Jim in St. Louis. In fact, Jim has been sharing pictures and videos on his Instagram Stories of the kids.

In one shot, Jim holds one of his twin sons, Hart, in his arms.

Meghan revealed last year that Hart suffers from irreversible brain damage. She recently opened up about the struggles of quarantine causing him to regress in his progress.

Tell us in the comments what you think about Meghan’s new boyfriend. Check back with TV Show Ace for updates on when Season 15 of The Real Housewives of Orange County will resume filming.