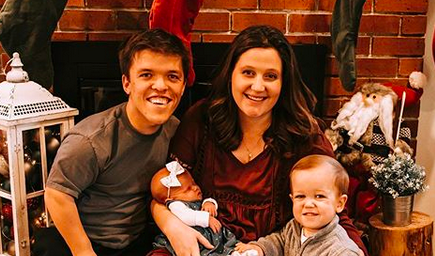 Ahead of the season finale of Little People, Big World on Tuesday, May 19, Zach and Tori Roloff answered some questions. TLC previously put a question box on their Instagram stories so that fans could ask Tori and Zach whatever they wanted to. So, some LPBW fans left their questions for the couple. The questions are about kids, cooking, and more. In the couple’s responses, they’re sitting on their stairs with three-year-old Jackson and six-month-old Lilah.

In response to a question, Tori talks about adjusting to life with two kids. She mentions that they have had six months to adjust. She says, “I think we’re adjusting pretty well by now. Lilah’s getting a lot easier, a lot more fun, a lot more interactive. And Jackson’s been a great big brother.” She adds that he’s very helpful too.

Baby Lilah's coming home! Tune in TONIGHT at 9/8c for the season finale of #LPBW.

When a fan asks about what the couple would have named Lilah if she were a boy, Zach and Tori refuse to share it. Zach says it’s “just in case they have another boy later on.” The couple has previously talked about wanting to have a big family. But Tori does say she’s happy since she has one boy and one girl.

A LPBW fan wanted to know about the couple’s first date. Zach talks about their first date and says it was “enjoyable.” He says that they went to dinner and a movie. Then, they went on a long drive. Tori sweetly says, “It was like one of those dates that I left feeling like I had known him for years and so I was just like, ‘This is great.'” Since that first date, the couple has grown and so has their little family.

In their responses, they talk about whether Zach cooks. Tori says that Zach “cooks” cereal and bagels. Both Tori and Zach agree that he makes “good turkey and cheese sandwiches.”

As for Jackson’s favorite food, the three-year-old proudly announces he likes macaroni and cheese. He also mentions that he likes “wa wa,” which Tori translates to “water.” At the end of the video, Jackson heads down the hallways to find his water. When Zach brings him back to the camera, Tori prompts Jackson to say, “thanks for watching,” and “don’t miss it tonight.” The Roloff family uses these stories to promote the season finale of LPBW, which airs Tuesday, May 19 on TLC.

So, what do you think of the family’s Q&A session? Share your thoughts in the comments below.