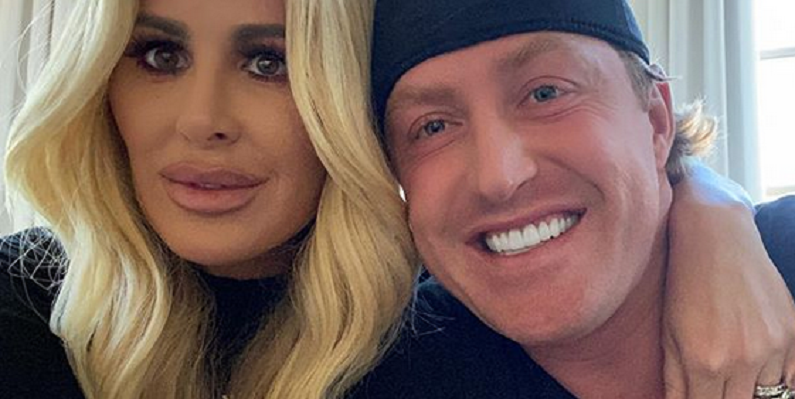 Kim Zolciak-Biermann is opening up about her time in quarantine. The Don’t Be Tardy star admitted that her hair has gotten gray. And it’s not just because this time has been stressful on her. It’s because she’s been without her personal hair colorist.

It’s no secret that Kim loves wigs. She admitted on previous episodes of The Real Housewives of Atlanta that she wears wigs. The real reason why she wears wigs is that it’s easier for her to get ready in the morning. She would rather spend more time on her makeup.

Kim Zolciak-Biermann revealed that she’s become “100 percent gray” at home, per People. Her husband, Kroy Biermann, is helping her dye her hair at home. Though businesses started opening up in Georgia, Kim isn’t venturing out to the salon anytime soon. She turned her Atlanta home into her own full-service salon.

The reality star chatted with People via Zoom last week. She revealed that Kroy has been helping her out during the quarantine. He even offered to color her hair. The natural brunette revealed that her gray hairs have been growing in.

Amid the coronavirus pandemic, the Bravo celebrity is unable to travel to Arizona or Los Angeles to see her hairstylist, Chrissy Ramussen. Kim doesn’t want to venture out to the local salon. Instead, she opted to have her hair dyed at home. Chrissy hooked up her husband with a special formula so he can become her personal colorist.

“Chrissy gave him the formula so he’s mixing and doing all this big concoction and it’s a process,” Kim explained. “We argue the whole time he colors my hair too. It’s the only time there’s a little bit of animosity because my bangs are really important.”

Kim doesn’t color her entire head. Since she wears wigs, Kroy just colors the roots. The reason why she’s so tough on him is because her mom worked as a hairdresser. She learned everything she knows from her mom.

This comes after Kim Zolciak-Biermann admitted to getting Botox and lip fillers during the coronavirus pandemic. On Sunday night, she chatted with Andy Cohen during his at-home version of Watch What Happens Live. During the after show, she was asked about her cosmetic procedures during this time of social distancing.

Since Atlanta’s stay-at-home order has been lifted, Kim and her daughter Brielle Biermann were the first patients back at their doctor’s office. Kim got Botox while her daughter got lip fillers. She then clarified that the Botox treatments she receives also treat her migraines. As for Brielle, she only gets lip injections.

Check out Kim Zolciak-Biermann on Season 8 of Don’t Be Tardy, coming this summer on Bravo.