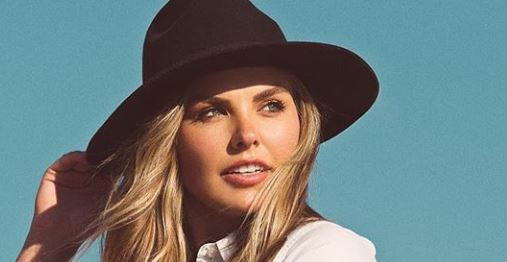 Hannah Brown feels embarrassed and is ashamed for saying the N-word. This was after she said the N-word on her Instagram Live on Saturday. She didn’t intentionally say the word but knows how wrong she was. Hannah understands she was completely in the wrong with what she did. Hannah is taking this as a lesson to learn and truly sorry.

The Dancing with the Star’s winner tried to remember a TikTok dance to Dababy’s “Rockstar” and sang a few words because she likes the song.  That’s when she said the N-word without thinking and apparently fans started calling Hannah out in the comments.

I used to think wearing my heart on my sleeve (or shirt) was a negative thing.. but I’ve never been more grateful for a heart that connects so easily with people’s wins and wounds. we are in this together. ❤️

When Hannah started seeing the comments at first she said, “I really don’t think I said that word, but now I’m like, ‘Oh God,'” “I’d never use that word. I’ve never called anybody that. We don’t say that word. Hannah kind of brushed it off and said that people could think what they want or get mad at her, whatever. “Even if I did accidentally say it, I’m very sorry, I was singing a song and not even thinking.”

Afterward, Hannah Brown issued a written apology via Instagram Stories. “I owe you all a major apology. There is no excuse and I will not justify what I said. After reading your messages and seen the hurt I have caused,” The Bachelorette alum wrote. “I own it all and am terribly sorry, and know that whether in public or private, this language is unacceptable. I promise to do better.”

According to US Weekly a source said, “Hannah Brown is remorseful and extremely upset by all of this.”

Tyler Cameron, Rachel Lindsay, and Bekah Martinez were among those who took to social media to address the Hannah Brown controversy. Rachel Lindsay has been the most outspoken about it all. She was the first black lead in the franchise. Rachel went to social media to call out the way Hannah Brown issued her apology because there was no video. Rachel said, “I’m not discrediting the apology I’m just saying we can’t give people a pass for this. You have to hold people accountable for what they’re doing.”

However, Tyler Cameron agreed with Rachel on people needing to educate themselves who don’t get it. He said, “this is not about dragging Hannah Brown, it’s about using your platform for reasons like this.” Because not to long ago Hannah was there for Tyler when his mother died suddenly. I’m sure he doesn’t want to say anything to make Hannah mad at him.

Hopefully, Hannah Brown will learn from all of this and she will be forgiven for her mistakes. You can watch The Bachelorette whenever it returns in the Fall on Monday nights.