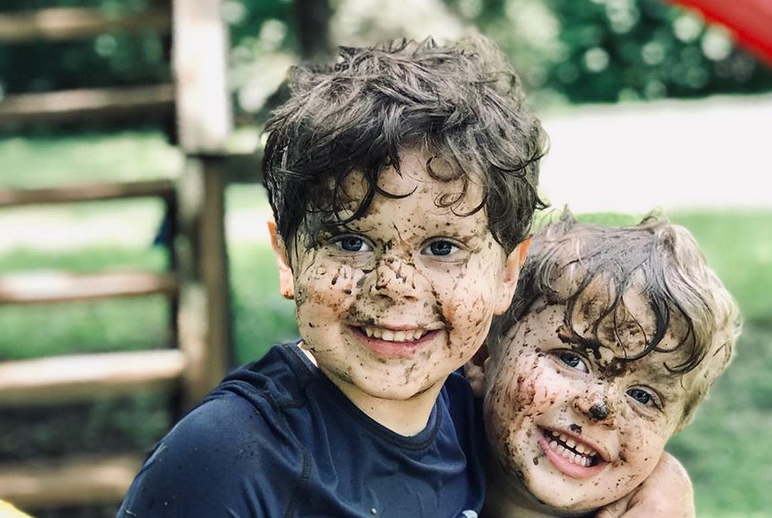 In a new social media post, Jessa Seewald shared that she let her two sons play in the mud. She posted a cute picture of Spurgeon, 4, and Henry, 3, covered in mud outside. Duggar fans are praising her for her carefree parenting style.

In the new post, Jessa shares both a picture and a video of her two sons. The boys are standing side-by-side and Jessa says that they are best friends. In the video, the boys are using cups and branches in the mud. Spurgeon has a great idea to play “baseball” with the mud. Henry tosses some mud Spurgeon’s way, and Spurgeon hits it with a branch. The boys are pretty creative and seem to enjoy themselves.

In the comments section of the post, Jessa reveals how she cleans the boys up after they play in the mud. A fan asks if Jessa had to hose them off. Then, Jessa says, “Pretty much! Didn’t want them to get cold though, so @ben_seewald filled a watering can with warm water and I let them shower with that outside before going inside for a bath.”

On his own Instagram account, Jessa’s husband Ben Seewald shared a video of the boys getting rinsed off outside. He reveals that the boys spent two hours in the mud.

Two hours of fun in the mud! When they decided they were done, I filled a watering can with warm water from the tub, and @jessaseewald gave them an outside “shower” to get the majority of the mud off— now headed inside for a proper shower. 🚿

In the comments section, Jessa’s followers are praising her for how she raises her kids. They think it’s great that she lets them play in the mud, no matter how messy they might get. One follower says, “The dirt washes away, the memories won’t. Perfect parenting.” Another says, “So glad to see that in 2020 children still have a good time with the simple things in life. Some of the best times I had as a child were after the rain and playing in the mud.” Jessa’s sister Jana also commented, calling the post “the greatest.”

This isn’t the first time that Jessa has been recognized for her parenting. Duggars fans feel that she’s doing a great job raising her kids. And, thanks to a recent YouTube video, fans are learning more about how Michelle Duggar raised her kids. In the video, Jessa speaks about her mom and points out some of the parenting strategies she used. So, because of the new video, fans also love Michelle’s parenting style. Some of them are even trying the techniques with their own children.

Duggar fans don’t always like Jessa’s posts and she occasionally gets parent-shamed. But, this time around, everyone seems to love the picture and video.

So, what do you think of Jessa’s post? Do you love seeing kids playing outside, even if they’re muddy? Share your thoughts in the comments below.