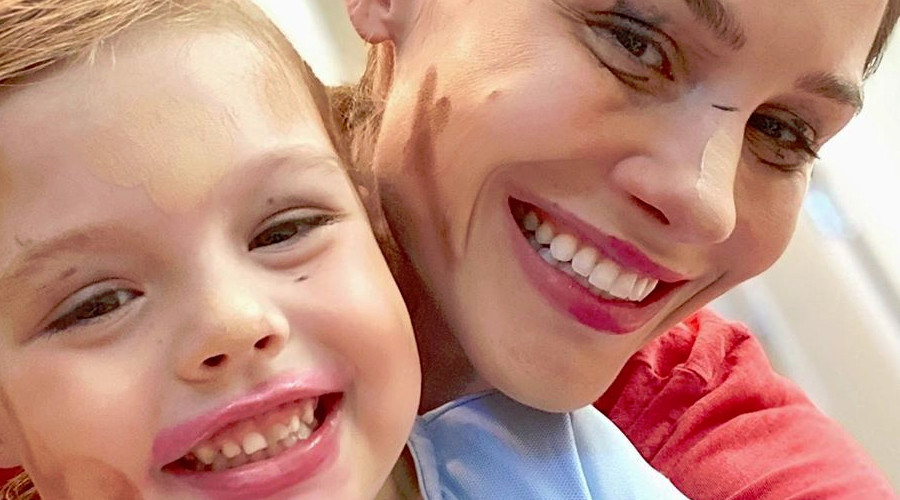 The Real Housewives of Orange County star Meghan King is over staying at home with three ‘screaming’ toddlers. In a lengthy blog post, the reality star vents about not having a moment of silence. She also encourages fans to judge her for her daughter’s sleeping arrangements.

His new love, Kortnie O’Connor, shared a few videos of her hanging out with Jim and Meghan’s kids.

Less than a week after sharing a candid post about her first Mother’s Day as a single mom, RHOC’s Meghan King is opening up about her experience of quarantining with three toddlers.

As fans know, Meghan shares three children with ex-husband, Jim Edmonds. 3-year-old Aspen and 23-month-old twin boys, Hart and Hayes. Since the lockdown happened on Meghan’s watch, all three have been at home with her in California.

In the opening paragraph of her blog post, Diary of a Single Mom, Meghan likens the stay-at-home orders to house arrest. “And not the cute, tongue-in-cheek Lindsay Lohan kind,” she jokes.

One thing Meghan struggles to find is quiet time, People reports. She writes that her children scream “non-stop.” She blames the lack of a front yard as part of the reason. Their inability to verbally communicate due to their ages is another reason.

In fact, the working mom found that she can’t record her Intimate Knowledge podcast because of the noise. She writes that she’s “going crazy” from lack of alone time. However, she does note that she has a live-in nanny.

In the middle of the blog post, Meghan offers up a tidbit sure to set the mommy-shamers wild. Her daughter, Aspen, used to sleep in the RHOC alum’s walk-in closet. According to Meghan, her rental home only has three bedrooms: one for the nanny, one for the twins and one Meghan shares with Aspen.

Meghan confirms that Aspen now sleeps in the bed with her. She also encourages mom-shamers to get their judging out of the way.

The RHOC star revealed last year that one of her twin sons, Hart, has irreversible brain damage that may later lead to Cerebral Palsy. A big part of the reason why she moved to California after Jim filed for divorce is to take Hart to therapy several times a week.

Hart is enrolled in speech therapy, physical therapy and occupational therapy. In her vulnerable blog post, Meghan details some of the issues he has. She reveals that Hart struggles with his balance, language and suffers behavior problems, including hitting and biting.

As TV Shows Ace reported recently, Meghan fielded a question from an Instagram fan about a mark on Hart’s face. Meghan alludes to this in the blog post when she writes,

“He struggles to know where his body is in space, causing him to trip and fall often—so next time you see a scratch on his face, please refer to this sentence as explanation.”

Meghan also shares some sad news with her fans: Hart not only reached a plateau with his therapy, he has regressed since the quarantine began.

The RHOC star admits that she feels guilty about his regression. Meghan recently took her three children to the beach after the stay-at-home orders were relaxed. In the caption, she assures fans that she IS doing the best she can right now.

As social distancing guidelines are starting to relax, I decided it was time to take my kids to the beach to breathe in a little taste of salty freedom. Looking into the endless sea triggered my feelings over the last 9 weeks to bubble to the surfaces of my fingertips… so I put my experience to paper. I poured my heart into the blog post entitled: “Diary Of A Single Mom In Quarantine… & It’s Not Pretty,” but it was a struggle to decide to post this one. (Even as I write this caption I wonder if I should pull it.) But alas this is me telling my story.  So please: know that I AM doing my best, I AM giving it my all as a mother, and I AM still trying to figure it all out. I hope you read today’s blog post with an open mind and please use the comments on this post as an opportunity to vent or brain dump whatever you’ve been feeling during quarantine… because I, for one, will not judge you.

While Meghan refers to herself as a single mom, it appears that her three children recently spent some time with Jim. His new girlfriend posted three videos on her Instagram Stories that featured Hart vacuuming the kitchen floor. While Hayes isn’t in the videos, Aspen is in the background.