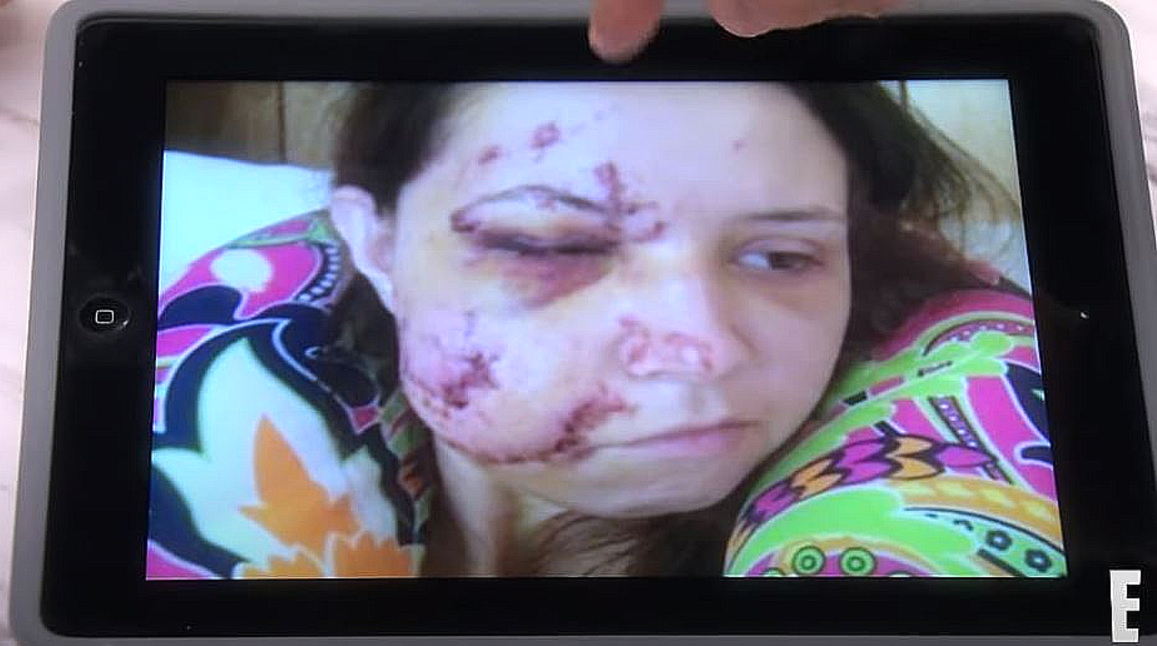 On tonight’s episode of E! Botched, a horrific motor vehicle accident that happened three years ago has left Brontee with huge scars on one side of her face.

She is tonight’s main focus on Botched where Drs. Nassif and Dubrow consult with her and her partner Axel who was with her in the car that evening.

The doctors get a full recounting of this terrible night. A drunk driver who also was on cocaine hit Brontee and Axel that night.

Axel escaped with a couple of scrapes, but Brontee was left in a situation she should have never been left in. She was left with a face full of glass bleeding all night in the emergency room until a surgeon could arrive the next day.

In the opening of the preview clip, Dr. Nassif lays it out: “So this basically was an MVA, a motor vehicle accident, [shows Dr. Dubrow her photo]  with glass in her face. Trauma to her face, take a peek here she is what she looks like now so well looks like she has some residual fullness from whatever that was.”

As you can imagine, this upsets Botched star Dr. Nassif greatly. His specialty is facial work and he takes this case very seriously. His anger is palpable.

What happened with Brontee’s consult?

Dr. Dubrow is consulting with lead Dr. Nassif, and they welcome Brontee and her partner Axel who are seated after the two reviewed the post-accident photos taken at the hospital.

Dr. Nassif asks her to recall the events and says: “We have is a few photos and obviously we see the scar and stuff. What happened?”

Brontee and Axel explain in detail what happened that awful night. “Three years ago we were involved in a car accident. A drunk driver had hit us [and] she blew a point two four blood alcohol…I think it was point one eight

Dr. Nassif is shocked at the level of inebriation and says: “Wow, she has more than twice the legal limit.”

She gave the details to the doctors: “The windows smashed and my face took the impact of the glass…”

Dr. Nassif asks her: “So the glass sliced right through your cheek?”

She confirms, and he asks Axel if he had any injuries to which he said no, just a couple of scrapes. Dr. Nassif asks Brontee: “You got taken in the ER by paramedics?” She tells him she was there all night, bleeding.

Brontee says that the doctors in duty “just wrapped it up” as they were trying to control the bleeding.  She tells Dr. Nassif that they left her wrapped up with bleeding wounds and she continued bleeding throughout the night.

The timeline worries the doctors. It was from midnight until the morning.  Brontee was left in the ER bleeding all night long. This angers Dr. Nassif who says that a doctor could have stopped the bleeding if the doctor closed the wound.

He adds: “Brontee had many problems waiting for a doctor to come in. The risk of infection goes way up. There’s a possibility that it could increase scar formation if you wait too long.  The doctor should have gotten his a** in there a lot sooner.”

Botched on E! is a reality series that chronicles the revisionary work of two board certified plastic surgeons, Drs. Nassif and Dubrow. They tackle malfeasance and surgeries gone south for people who have nowhere to turn.

The series is a look at how accidents and elective surgeries can ruin peoples’ lives and how the combine efforts of these two medical doctors can changes lives and restore hope through remarkable and transformational surgeries.

Renowned plastic surgeons Dr. Terry Dubrow and Dr. Paul Nassif’s surgical skills and efforts have ended suffering for many people who made bad decisions or as in Brontee’s case, suffered in an accident.

Matt Roloff Shuts Down Accusations Of Being Rich, What’s His Net Worth?
‘Bringing Up Bates’ Fans In Despair Waiting On Renewal Or Cancelation
Maddie Brown Brush Gets Relatable About Cooking & Groceries
Lauryn ‘Pumpkin’ Efird Ready To Pop At 39 Weeks: See Baby Bump Pic
Matt Roloff Updates On Family Emergency: How Are His Parents?