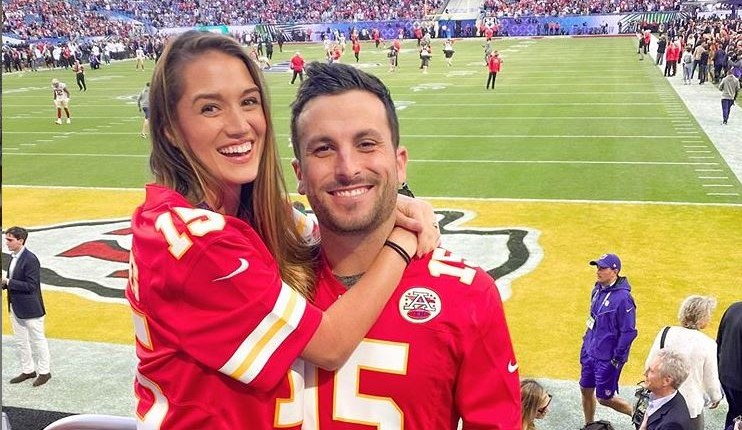 Bachelor in Paradise couple Jade Roper and Tanner Tolbert have just announced their family is growing. The couple has recently talked about expanding their family, but both weren’t certain it was the time. It looks like it isn’t a choice anymore! Jade is pregnant with baby number three.

Jade and Tanner are having another baby

It’s happening! Jade and Tanner went to Instagram to share the big news. The couple is expecting baby number 3. The announcement is adorable. The picture shows Tanner laying sprawled out, face down on the floor. Jade and their two children are sitting on him. He’s holding up a pregnancy test and an ultrasound photo.

Jade started her post saying, “HERE WE GROW AGAIN!!!” She continued on saying how glad she is to finally talk about her new pregnancy. She went on to say how her lack of presence on social media has been due to feeling so sick and fatigued. Throw in two small children during a pandemic and Jade definitely has her hands full.

She continued saying, “Although this time has its uncertainties, we are so thankful and excited for this baby. I truly believe babies being born during this time are here for a special reason, to be light workers.” She and Tanner are excited to give Emmy and Brooks a sibling and have them be so close in age. Jade concluded her post saying,  “#partyof5 #babynumber3.” Tanner responded to the post saying, “Our basketball team is almost complete.” He also shared her post via Instagram stories and said, “Oops we did it again!”

Tanner recently admitted he was on the fence

Just recently Tanner had said he was not sure he was ready for baby number 3. Jade had even commented saying it would take some convincing to get him on board. Tanner went on to say that if they were going to do it they needed to it now. At the time Jade said she wasn’t so sure about jumping into again quite so soon. After all, Brooks is just now 9 months old.

Jade and Tanner are going to have their hands full, but it’s so worth it. They make adorable children and fans love following their story on social media. Any guesses what gender the new baby will be? Hopefully, they find out and share with everyone soon.

Jade has not said exactly when she is due. Stay tuned to TV Shows Ace and we will keep you posted on all the new developments. And, don’t miss the season finale of The Bachelor: Listen to Your Heart tonight on ABC.