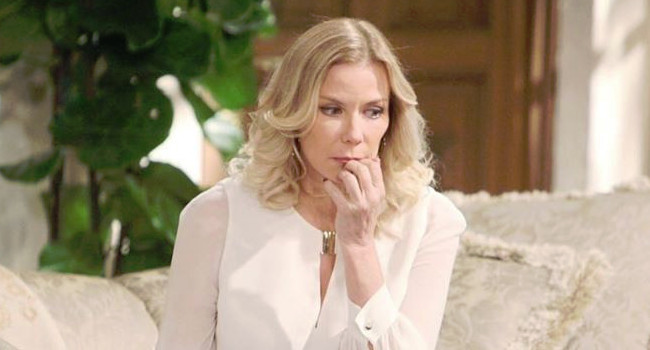 As fans know, three out of the four daytime dramas currently on the air are running out of new episodes. Production shut down in mid-March due to the coronavirus quarantine. CBS soaps, The Bold & The Beautiful and The Young & The Restless, dipped into the archives for weekly themed classic episodes.

ABC’s General Hospital airs classic #FlashbackFriday episodes are on Fridays, while new episodes continue to air Monday through Thursday. But not for long. GH will soon run out of new episodes, too.

Days of Our Lives films six months in advance. NBC has new episodes of the soap opera until at least October.

The shutdown was originally only supposed to be two weeks, Deadline reports. It’s now been two months and B&B wants to resume production.

Some states are slowly lifting quarantine orders and reopening businesses previously deemed nonessential. The production company that films B&B is hoping they can get back to work in June.

A source at Deadline is familiar with a memo to the show’s cast and crew. The memo announces that the production company is taking steps to resume production in June. However, there are many conditions that need to fall in place first.

The cast and crews union is putting safety protocols in place. But the city of Los Angeles and the state of California have to approve the measures. California recently extended the stay-at-home order in Los Angeles while allowing other counties to reopen.

The production company’s plan to resume filming is not yet official.

Love her or hate her, Brooke Logan has been a staple on The Bold & The Beautiful. Katherine Kelly Lang has been with the CBS soap since its inception in 1987. In fact, along with John McCook (Eric Forrester,) she is one of the only original cast members left.

From the beginning of the soap, Brooke has been involved in a love triangle for the ages with Ridge Forrester (originally played by Ronn Moss, now played by Kaysten Thorne.) Brooke fought rival Taylor (Hunter Tylo) for Ridge’s affections for over a decade.

The Bold and the Beautiful announced on social media that the theme for this coming week, May 18, is Brooke Logan. They wrote, “you know you love her.” Fans were divided in the comments about their love or hate for the iconic character.

Tell us in the comments if you’re ready for Brooke Logan week on B&B.

The Bold & The Beautiful airs weekdays on CBS. Check out the teaser for this week’s Brooke tribute below.

You know you love her. 💙 Don't miss "The One, The Only Brooke Logan" Week with episodes featuring @katherinekellylang next week on #BoldandBeautiful!

Tammy Slaton Gets Candid About Her Weight Struggles & Feelings
‘Love After Lockup’: Are Angela & Tony Back Together?
‘Sister Wives’ Fans Think Kody Brown ONLY Loves Robyn
‘RHOC’ Shakeup: These Four Women Could Get The Boot
Are The Results In Of ’90 Day Fiance’ Stars Paul And Karine’s Kids’ DNA Test?