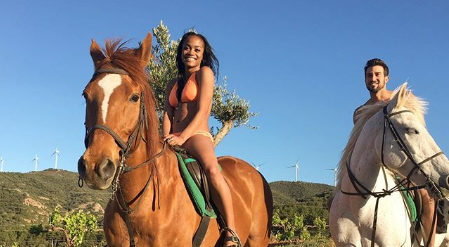 Rachel Lindsay of The Bachelorette is speaking out on Hannah Brown’s latest controversy. Hannah who has been active on her Instagram Live and Tik Tok was trying to remember the moves to a dance and sang a song by DaBaby called “Rockstar.” In singing the song, Hannah sang the n-word.

She had denied it at first saying she was pretty sure she hadn’t said the word. Afterward she got called out by Bekah Martinez of Bachelor nation and several fans, so she apologized. According to US Weekly Rachel Lindsay got on her bike and worked out before addressing the situation. She had stress to deal with and told fans to disregard her appearance.

Why Did Rachel Lindsay Decide To Speak Out?

She said she reached out to Hannah because she thought, “Let me challenge this person to use their platform,’ because last night it was used in a different way, so let me challenge them to use it in a better way, right.” She said maybe it was a mistake and she didn’t realize the intention. She told Hannah she’d personally offended her. The thought was to give them the time to correct her mistake. Instead of video, Brown posted a message promising to do better.

Remember what it was like to go out on dates? Yeah we barely do either. So @thebryanabasolo and I are doing a FIRST. We are taking a trip down memory lane and inviting you to come on IG Live with us and tell us your craziest/funniest dating story. We all could use a good laugh 🤣. Tag a friend below you know that has a really good story and tell them to tune into Rise and Shine w/ R&B to tell their story to us! I def have a story to tell too 😳👀

How Did Lindsay Respond To Her Apology?

Rachel Lindsay said, “it’s easy to make a statement, it’s easy to hide behind words, but when you’re bold enough to say the N-word on camera, on your platform … then you need to be bold enough to use your face on camera and apologize in the same way.” She didn’t think the message was good enough. Rachel stated you can’t give people a pass for using the word.

She said she came out and said something because she wanted to educate people on that word. Lindsay said, “if you feel offended or you feel wronged, don’t give them a pass, hold them accountable for what they did, and that’s what I did today.” It’s possible Hannah Brown won’t say anything else and wait for this to blow over, because that’s what reality stars tend to do. It depends on how much pressure both fans and Bachelor nation continue to give her on the subject. Everyone will just wait and see.