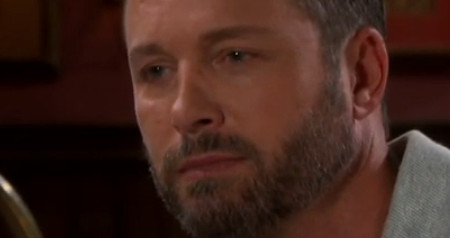 Days of Our Lives fans are in for a surprising hook-up this week. But first, Gabi (Camila Banus) is arrested by Lani (Sal Stowers) for assaulting Jake/Stefan (Brandon Barash.) Lani is quite gleeful over the chance to arrest her nemesis.

What else does DOOL have in store for fans?

All in the Family on DOOL: Brady Hooks Up With Sarah

This week sees Brady and Sarah mourn their losses together. Spoilers say the two end up in bed together.

How will Eric (Greg Vaughn) react to Sarah hooking up with yet another one of his brothers? (Remember, she was engaged to Rex, Kyle Lowder, when she first returned to town.)

However, someone far more dangerous than Hope disapproves of the union as well. Ciara’s grandpa Victor (John Aniston) isn’t jumping for joy for the couple. Granted, he’s in a hospital bed when she breaks the news to him.

What will Victor do to protect his granddaughter from The Necktie Killer?

However, young David (twins Caleb and Kyler Ends) comes to John’s aid. Will it be enough to help John escape the clutches of Orpheus?

DOOL Promo Shades Other Soaps for Running Out of New Episodes

Days of Our Lives is the only of the four remaining soaps to still have new episodes amid the coronavirus shutdown. And they aren’t afraid to let fans know. In their weekly promo, the NBC soap shades the other networks for running out of new episodes.

Clips of the upcoming action are punctuated with a shady message. THE GOOD NEWS…DAYS IS NEW…ALL WEEK LONG.

CBS soaps The Young & The Restless and The Bold & The Beautiful started airing classic episodes after running out of new ones.

However, GH will also soon run out of new episodes.

DOOL, on the other hand, filmed far enough in advance to have new episodes through October. Unlike the other soaps, DOOL films six months in advance.

Days of Our Lives airs weekdays on NBC. Check out the shady promo below.