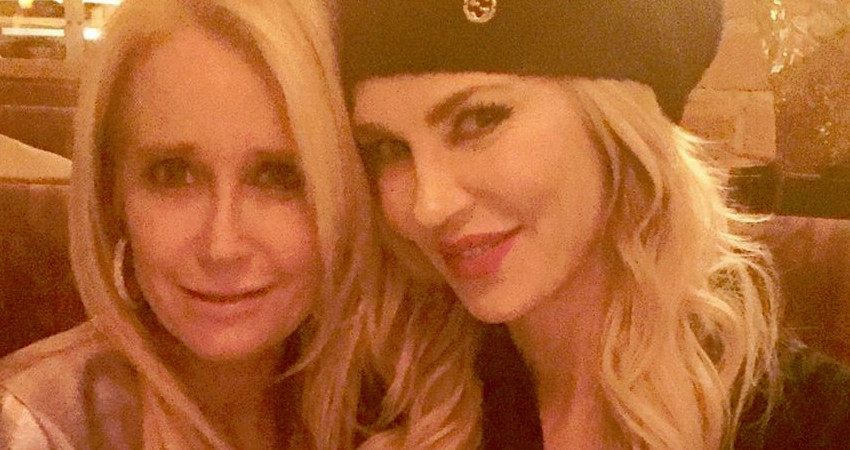 One thing any Real Housewives of Beverly Hills fans know is that the friendships are always changing. Two stars may fight like cats and dogs one season. Then be close friends the next.

Such is the case for RHOBH’s Kyle Richards and Brandi Glanville. When Brandi was on the show full-time, she often tussled with Kyle. Perhaps because Kyle was jealous of Brandi’s friendship with Lisa Vanderpump.

Whatever the reason, the ice between the former RHOBH co-stars is thawed. In fact, Kyle recently stood up for Brandi’s honesty.

Speaking to Us Weekly, Kyle admits that Brandi’s personality can be abrasive. She flat-out called the former model an “a**hole.” However, that doesn’t mean Kyle doesn’t believe Brandi about her alleged hook-up with RHOBH co-star Denise Richards.

As fans know, Brandi has been dropping hints about her romantic relationship with Denise. In fact, much of Season 10 seems to be devoted to the Denise/Brandi drama.

While Brandi has yet to appear on Season 10, she recently teased on Twitter that she’s coming.

Kyle tells Us Weekly that she has seen Brandi’s “temper,” but doesn’t think she’s lying about Denise. On the other hand, Kyle notes that she doesn’t know Denise “well enough” to say the same about the Wild Things actress.

For her part, Denise recently called out Kyle for being the one who told her about the “Bravo, Bravo” tactic, TV Shows Ace reports.

Brandi Responds on Twitter, Admits to Being an ‘A**hole,’ Insists She’s Not Lying

Kyle’s comments didn’t go unnoticed by Brandi. The Drinking & Tweeting author references Kyle’s words in a tweet earlier this week. Brandi wrote, “Yes, I can be an a**hole but I’m not lying.”

Brandi went on to take aim at the insults she receives from RHOBH fans. She beat them to the punch by joking that she knows she’s an “old, plastic, desperate liar.”

Made 1st drink of the night &yes I can be an asshole but Im not lying.Twitter is ground zero for haters It use to be fun so let me say it for you… Im old,plastic,desperate,a liar, what happened to my face… Please FUCK OFF because ultimately Im happy & your jealous

While it’s hard to believe that the RHOBH rivals are on relatively good terms, Brandi calls a very unlikely person one of her “best friends.” Years after Kyle’s sister, Kim Richards, called Brandi a “s*ut pig,” the two have buried the hatchet.

In fact, the two were supposed to go on a joint Blonde & Blonder speaking tour this summer. The tour is postponed for the time being due to the coronavirus pandemic.

Blonde & Blonder: The Reality Of Our Reality! • A dream of mine is finally coming to fruition! I get to work with one of my best friends in the whole world and we get to do what we do best, be nutty and have fun doing it! Who’s coming!?! • Sun Apr 26 2020 6:00 PM (Doors 4:30 PM) Irvine Improv Irvine CA • #linkinbio for tickets ❤️

Tell us in the comments or tweet us to let us know if you’re #TeamBrandi or #TeamDenise.

The Real Housewives of Beverly Hills continues Season 10 Wednesdays on Bravo. Check out the preview of next week’s episode below.