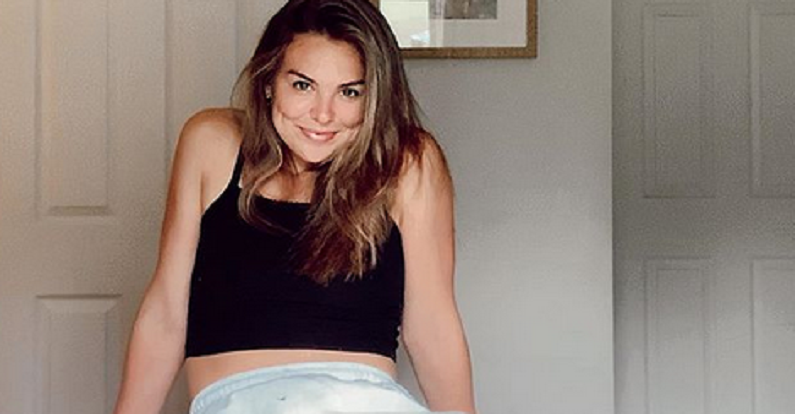 Hannah Brown is sharing some support for Tyler Cameron. She made it clear that she’s a huge fan of his new show Barkitecture. The former Bachelorette is showing some major praise for her ex-boyfriend and good friend these days. This comes after Hannah and Tyler spent time in quarantine together.

While the two insist they are just friends, it’s clear there’s some chemistry there. The former couple also gets flirty on social media. Both Hannah and Tyler insist that they are still single. But that doesn’t mean that they don’t support each other’s future endeavors. Hannah had some kind words to say about Tyler’s new series.

Hannah Brown is a fan of Tyler Cameron’s Barkitecture

Per Us Weekly, Hannah Brown and her brother, Patrick Brown, made a rare appearance on Instagram Live on Thursday, May 14. A fan asked her if she would let Tyler Cameron’s new show, Barkitecture, build a house for her own dog, Roscoe. Hannah revealed that she’s in love with the show and even named her favorite episode.

“Yeah, have you all been watching it?” Hannah Brown exclaimed. “It’s awesome, right? We love it. My favorite house was the second episode [with Kyle Richards].”

Hannah is already hooked. She’s been binge-watching the series. Her brother said that only two episodes have aired so far. She corrected him and said, “There’s an episode every day. Come on. Show support.”

The new Quibi series follows Tyler and designer Delia Kenza as they collaborate to build dog houses for celebrities such as Joel McHale, Lisa Vanderpump, Rumer Willis, and Teyana Taylor. Tyler previously told Us Weekly earlier this month that working with Delia was a no-brainer since they’re both dog lovers.

“Dogs means so much to these people that we worked with,” Tyler said. “It was so cool to give back to the dogs and build these extravagant houses and, I mean, they’re just so over the top, but it’s so much fun.”

Although Tyler is focused on his new project, he’s made room for some downtime. He’s currently staying with his friends in Florida amid the coronavirus pandemic. Hannah even joined the Quarantine Crew back in March for a few weeks. Their sighting sparked the rumors that the two were back together. But both Hannah and Tyler insisted that they are “just friends.”

The dating rumors continue to follow her everywhere she goes. Hannah Brown poked some fun at herself on TikTok, per MSN Entertainment. The 25-year-old model shared a video of herself and her mom, Susanne Brown, lounging on the beach.

“It’s insane to think that a pandemic postponed my wedding,” Hannah Brown joked. “What are the odds? Like, I’m not dating anyone, but this for sure pushed it back.”

But it’s not what you think. Hannah doesn’t have intentions of marrying anytime soon. She mouthed the words from another popular TikTok video as she held up a glass of wine. The reality star captioned the video, “Best Actress in a Supporting Role goes to … Mama Brown.”

Hannah Brown previously reflected on her engagement to Jedd Wyatt. He won the final rose and her heart on Season 15 of The Bachelorette. While Jedd popped the question, Hannah called off their engagement after she learned that he had a girlfriend before appearing on her season.