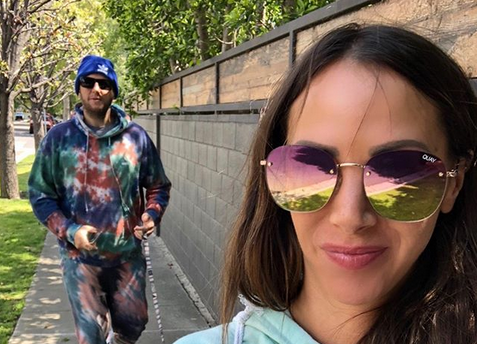 Vanderpump Rules star Kristen Doute ended her relationship with Brian Carter in February 2019. After their split, the two continued to talk and occasionally hooked up. She recently opened up about somebody she was going out with, but made it clear that he wasn’t her boyfriend. Well, it seems like their relationship is official now. On Friday, May 15, the VPR star posted pictures with her love interest, Alex Menache.

Kristen posted two pictures with Alex on Instagram on Friday, May 15. She’d previously mentioned that they were quarantined together, but not making things official yet. However, she’s beginning to make her relationship more public.

Kristen’s first post featured her and Alex wearing tie dye outfits. She captioned the picture, “pretty fly for tie dye,” with a peace sign emoji and a blue heart emoji. Her second post was a selfie of the couple in their swimsuits, with the caption, “he wanted a photo with his hair done but this is my Instagram.” She added a blushing emoji with hearts. VPR star Kristen tagged Alex in both of her pictures, but his account is private.

Fans in the comments of both posts seem supportive of this new relationship. One user says, “Glad you’ve found happiness. You deserve it.” Others send heart emojis and tell Kristen how happy they are for her. After Kristen’s difficult relationship with Brian, fans are glad to see Kristen back into the dating scene.

Other VPR stars also express their support to Kristen. Scheana Shay says, “This makes my heart so happy! You deserve all the happiness in the world my love. You have such a big heart and always give and put others first! It’s YOUR turn to be happy!!!!” Lala Kent chimes in, saying that she loves Kristen and Alex. Kristen’s friends from the show understand what she’s been through and love to see her happy.

Although the VPR star broke up with Brian over a year ago, it seemed like they were still seeing each other here and there in recent months. On an episode of the We Met at ACME podcast, Kristen told listeners that she’d moved on. She explained that she was single but dating Alex. Kristen said Alex is not a boyfriend, but he is her “quarantine babe.” Additionally, she mentioned wanting to take things slow with Alex. This explains why it took Kristen so long to post about her new man publicly.

These statements left fans puzzled about Kristen’s relationship status. It sounded like she was very interested in Alex, but she wouldn’t admit to having a boyfriend. Now, thanks to Kristen’s Instagram posts, fans can safely assume that Kristen is confident in this relationship.

What do you think of Kristen’s new relationship? Do you think she’s happy with Alex? Let us know in the comments.