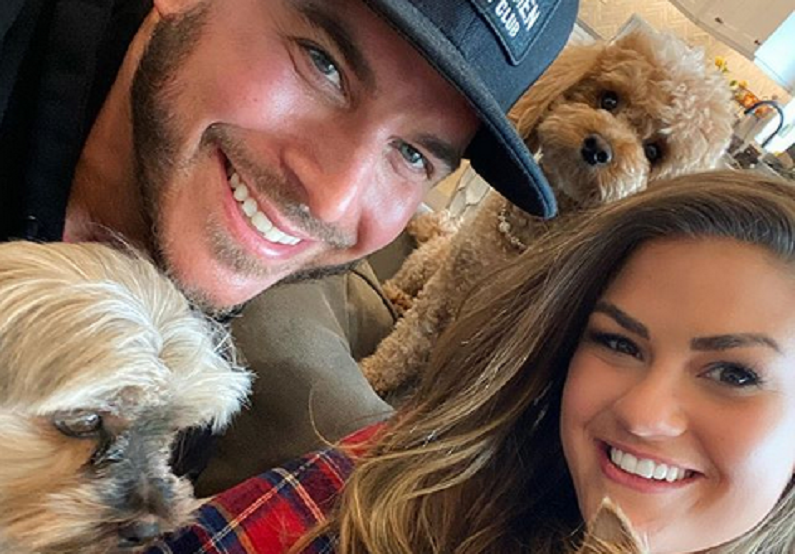 Brittany Cartwright is standing by her man. In the latter part of Vanderpump Rules Season 8, Jax Taylor has gone on a downward spiral. But Brittany doesn’t think he’s being a bad boy. She just thinks he’s having a case of the “mood swings.”

The SURver made an appearance on Stassi Schroeder’s “Straight Up With Stassi” podcast. The 31-year-old defended Jax. This comes after viewers slammed him for rethinking his marriage to Brittany. But she doesn’t see it that way. She just think he’s having one of his moods.

The Kentucky native spoke to Stassi Schroeder on her podcast on Friday, May 15. Brittany Cartwright compared her husband Jax Taylor to a “girl on their period.” The friends also talked about his “mood swings.”

“[The biggest misconception about Jax is] that he’s always a bad guy, because he’s not at all,” Brittany explained, as quoted by Us Weekly. “He does stupid things and he makes stupid mistakes, but so does everyone else. So does everybody else on our show. He goes through ups and downs, emotional waves, as you know. He’s like a girl on their period sometimes.”

Stassi agreed with her and added, “Totally! That’s exactly what he seems like.” Brittany noted that her 40-year-old husband must have “mood swings or something.” While Jax’s up and down moods can be hard for her to manage, she feels that she knows him best. Brittany went on to call Jax “sweet” and “kind.” She claims that he treats her well, even when he’s in one of his moods.

Brittany feels that Jax’s behavior has “magnified” on the show. She doesn’t like the sudden focus on his behavior. Brittany assured viewers that everything they see on the show doesn’t mimic their marriage. She insists that she doesn’t cave into Jax, and that sometimes those comments get to her.

Brittany Cartwright felt that Jax Taylor was cheating on her

Brittany Cartwright and Jax Taylor  have overcome his infidelity issues. They have so much trust for each other that they got married in June 2019. But after the honeymoon period ended, Jax struggled to realize that he’s a married man now. He even lashed out at his friends, as seen on this season of Vanderpump Rules.

On Tuesday night’s episode, Jax’s behavior erupts. He “rage-texted” Max Boyens and uninvited his friends from his pool party. In order to avoid confrontations with Brittany, he heads to the gym. He chooses to work out when he’s angry to avoid getting into an argument. But for his wife, it reminded her of the time when he had an affair with Faith Stowers in 2017.

“I feel like when Jax did cheat on me, I didn’t see very much of him, or he would try to be gone from the house a lot,” Brittany revealed in a confessional, as quoted by People. “It just almost feels a little repetitive of things that we’ve been through in the past. I don’t want to ever get that bad again.”

Jax has been working out

But Jax ignored her feelings and told her that she can track him on his phone. The episode showed clips from Jax’s Instagram Stories. In most of the clips, he’s seen furiously working out. At one point, he shouts at the camera.

“Oh no, my wife thinks I’m messing around because I go to the gym?” Jax asks, raising his voice. “You didn’t know that? What wife on this earth yells at her husband for going to the gym?”

At the end of the episode, Jax talks to Stassi at his housewarming pool party. He reveals to her that he’s been “emotional” and he’s scared to take out his issues on his wife.