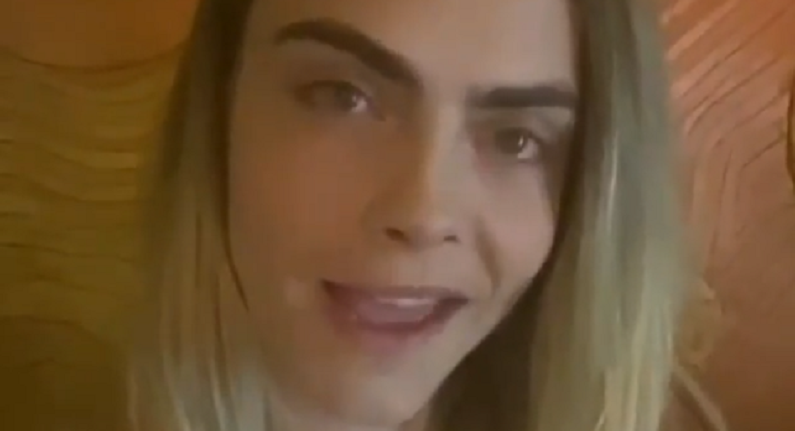 Cara Delevingne spoke out about her split from Ashley Benson. TV Shows Ace previously reported that the couple went their separate ways. Delevingne doesn’t want any bad blood with the Pretty Little Liars actress. She doesn’t like the sudden hate against her ex-girlfriend.

Fans took sides on the couple’s split. They’re unhappy to hear the love has died. Ashley reportedly moved on with rapper G-Eazy. Most of those unhappy fans took to Delevingne’s social media accounts to throw shade at Benson. But the British supermodel doesn’t want to cause any trouble.

Cara Develingne told her fans to leave her ex-girlfriend, Ashley Benson, alone. On Thursday, May 14, the British actress defended the 30-year-old actress on her Instagram Stories. Delevingne felt the need to open up about their breakup since it hasn’t played out well in the media, as per ET. The fan backlash led to her to speak out about it.

“It’s more important now than ever to spread love, not hate,” Delevingne wrote. “To everyone hating on @ashleybenson please stop. You don’t know the truth, only her and I do and that’s exactly how it should be.”

This is the first time that Delevingne has spoken out about their breakup. Earlier this month, reports surfaced that Delevingne and Benson split after two years of dating. While the couple was private and low-key, Delevingne confirmed their relationship back in June 2019.

An inside source told People, “Cara and Ashley always had their ups and down but it’s over now,” adding, “Their relationship just ran its course.” On Tuesday, May 12, Benson was photographed grocery shopping with G-Eazy. The duo were spotted kissing while picking up a takeout order in Los Angeles, as per E! News. Delevingne’s fans criticized Benson for moving on so quickly after their split.

Per Cosmopolitan, Benson addressed those pesky G-Eazy dating rumors. On Thursday, May 14, she liked an Instagram post that read, “You can’t say they are dating just because of a Like and some comments. Can’t Ashley have friends now? STOP SAYING ASHLEY CHEATED! OR EVEN CARA! They just need friends right now more than ever.”

The fan account included a screenshot that read, “At this point, I’m not fully convinced they’re dating….Also, while rebounds are notoriously regrettable, imagine going from Cara Delevingne to G-Eazy. I simply cannot!”

SHE LIKED BECAUSE SHE’S NOT DATING G EAZY! It’s a crappy edit but it’s already midnight here and I need to sleep but AGAIN, READ THE ARTICLE AND MY CAPTION FIRST 🙄🙄🙄

Benson liked the Instagram post. She was probably making it clear that they’re just good friends. However, another source told People that G-Eazy and Benson are romantically involved, but it’s not serious.

“It feels just like a fling for now,” the source told the outlet. “She’s getting over a breakup.”

It appears that the split between Delevingne and Benson was mutual. And Delevingne made it clear that their fans need to stay out of their private life.

What are your thoughts on Cara Delevingne and Ashley Benson ending their relationship? Sound off below in the comments section.