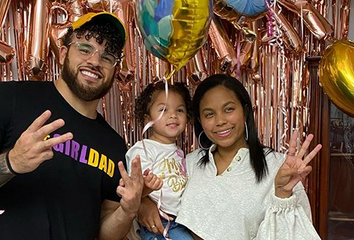 On the Tuesday, May 12 episode of Teen Mom OG, Cheyenne Floyd had to rush her daughter, Ryder, to the emergency room. Ryder has VLCAD deficiency, a rare congenital condition. This disorder can lead to many other health issues, which is why Cheyenne was so concerned when her daughter started feeling sick. In response to this episode, fans claimed that Cheyenne only took her daughter to the hospital for attention from the media and Ryder’s dad, Cory Wharton.

Cory, Cheyenne’s ex-boyfriend and Ryder’s father, was busy filming The Challenge when Ryder started looking ill. So, he wasn’t around to go to the hospital with Cheyenne and their daughter. Ryder had a high fever and was having trouble keeping food down, which alarmed Cheyenne. Teen Mom OG star Cheyenne quickly took her daughter to the hospital to have her tested. The doctors gave Ryder an IV and eventually got her to start eating again.

While Cheyenne was in the hospital, she thought about telling Cory what was going on. She wanted him to be aware of what his daughter was going through and Cheyenne needed the support. However, she wanted Cory to stay focused while filming and didn’t want to make him leave his show.

After the episode aired, fans said that Cheyenne used Ryder’s hospital visits as a way to get attention from Cory. On Monday, May 12, Cheyenne defended herself on Twitter, saying, “For everyone who keeps saying Ryder was in the hospital because I was seeking attention from Cory, what’s wrong with you?”

for everyone who keeps saying Ryder was in the hospital because I was seeking attention from Cory.. what’s wrong with you? I allow them to show when Ry is sick to bring awareness to her illness. Either then that shut the fuck up.

Additionally, she says that she agrees to have Ryder on Teen Mom OG and social media to help others see what VLCAD deficiency is like. Because it’s a rare disorder, Cheyenne believes it’s important to share Ryder’s story to encourage other people with her condition. However, because Cheyenne has posted about her daughter’s health issues in the past, fans aren’t convinced that Cheyenne isn’t looking for attention.

Just as Cheyenne keeps a close eye on Ryder’s health, Cory is also aware of the risks she faces. In an interview with Us Weekly, hey says, “She can’t process fatty foods into energy. When she was a newborn, Cheyenne would have to wake up every two hours and feed Ryder.” He also mentions what it means for his daughter’s health. Cory continues, “With the condition, she has no side effects, but we still monitor it. She has to take medicine, she sees a specialist.”

Ryder receives lots of support from both of her parents. It seems that both Cory and Cheyenne are involved in making sure Ryder receives the medical attention she needs.

Do you think that Cheyenne is using her daughter’s health condition to get attention? Let us know in the comments.