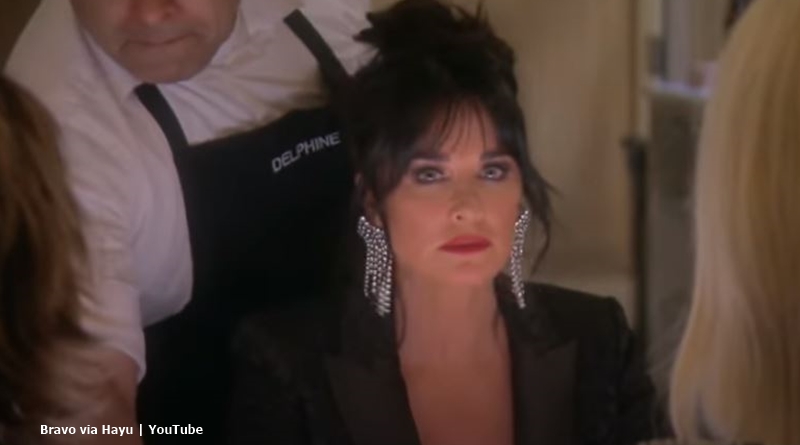 RHOBH just wouldn’t be the same without drama and feuds from Kyle Richards. In fact, her fans feel she makes the show and declared her “the queen” over Lisa Vandperpump. Well, Lisa departed the Bravo show partly because of Kyle’s attacks on her. With Lisa gone, it looks like Kyle set her sights on Denise Richards. Recently they fell out at a dinner in Los Angeles. Now Kyle fueled the feud by accusing Denise of staging scenes on the show.

The Real Housewives of Beverly Hills fans saw yet another argument startup at a dinner in Los Angeles. Actually, many feuds start over a meal and a few drinks with the ladies in the cast. TV Shows Ace reported that it all flared up between Kyle and Denise as an offshoot of some bickering between Dorit Kemsley and Sutton Stracke. Already uneasy with each other, Denise “told Kyle Richards to “be quiet” after the RHOBH cast member called her a “fake a** b****es.”

On Wednesday, May 13, USWeekly noted the two RHOBH stars took their dispute to Twitter. And, it started with Kyle. She felt that Denise got her teen daughter, Sami to “stage a scene.” In the episode, Denise and Sami talked about “comments made by Erika Jayne, Garcelle Beauvais, and the other ladies at a dinner party.” The party took place at the home of Denise the previous week. Some of the guests talked about threesomes and it worried Denise that her daughter overheard it.

Kyle accuses Denise of ‘staging the scene’ with Sami

Taking to her Twitter, Kyle slammed Denise, before launching into various disputes with other cast members.  She wrote, “This feels like a set up to me” The Real Housewives of Beverly Hills veteran added, “Clearly Denise had this conversation with her daughter prior to this.” She felt that later, Denise then rehashed the “conversation on camera.” Well, Denise didn’t take that accusation lying down, and naturally, she responded.

The RHOBH star said to Kyle, “No Kyle … it actually happened on camera twice. Ask our producers.” Well, one fan noted, “You complain when people don’t show their lives. Then when they do say it was set up.” They also note that a lot of “solo scenes are set up even the audience knows that.” Another person commented to Kyle, “Well you would know about a set up better than anyone.”

Well you would know about a set up better than anyone pic.twitter.com/ipL6Oo4qFa

What do you think of Kyle escalating the feud with Denise Richards on Twitter? Do you agree that often, scenes get staged or rehearsed for the RHOBH show? Sound off in the comments below.

Remember to check back with TV Shows Ace for more news about the cast of Bravo’s RHOBH.