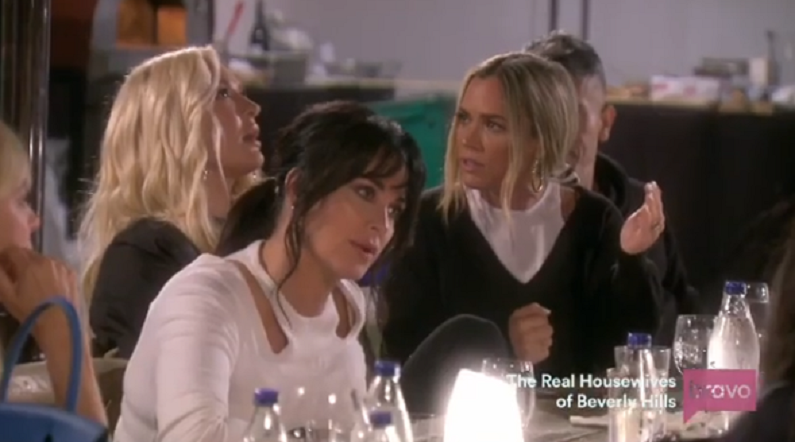 RHOBH stars Denise Richards and Kyle Richards are at war. While they share the same last name, they aren’t exactly family or even friends. During Wednesday night’s episode of The Real Housewives of Beverly Hills, the two got into a feud during dinner in Los Angeles. This comes after Kyle left a barbeque party at Denise’s Malibu home.

Their argument came after Dorit Kemsley and Sutton Stracke had their own heated discussion. Their argument was centered around a comment that Sutton made earlier on in the evening prior to a launch party for Lisa Rinna’s daughter’s new clothing line. But it looks like Denise and Kyle’s feud is still happening outside of the show.

As per People, Denise Richards told Kyle Richards to “be quiet” after the RHOBH cast member called her a “fake a** b****es.” In the middle of her argument with Sutton, Dorit found herself arguing with Kyle. But Kyle turned to Dorit, telling her, “I don’t want to fight with you anymore. You know that I love you, I want to get past that whole stupid thing.”

“Well, sometimes you are,” Kyle admitted.

Then Dorit asked Kyle what she meant by that. She said that she didn’t want to go “down that road.” Clearly, the RHOBH cast member wasn’t in the mood for another fight. She just wanted to apologize to Dorit and move past it.

But then Denise chimed in and wanted answers.

“Well, I think everybody has that potential,” Kyle said.

“I already said it,” Kyle explained. “You guys can keep chasing, but –”

Denise wanted to know what Kyle was saying though. Then she snapped and said that Kyle never listens. She only says what’s on her mind. Kyle told her that she was willing to listen to her. But that didn’t suffice the Wild Things actress.

She reminded Kyle that there were many occasions when she wasn’t in full glam. Kyle thinks her style has changed. Her fellow cast member wanted to know how that makes her fake. The two go back and forth until Lisa says she should take her 91-year-old mother, Lois, home.

Per Us Weekly, Kyle Richards admits that she regrets calling Denise Richards a “ragamuffin” on a previous episode of The Real Housewives of Beverly Hills. She also believes there’s more going on behind the scenes. Kyle feels that there are conversations happening behind her back. That’s when she pointed out that Denise speaks to former Beverly Hills housewives.

“I had never argued with Denise until this whole thing happened,” Kyle told Us Weekly. “Honestly, I think there were some conversations happening off camera with perhaps some former Housewives, is what I’m thinking.”

Meanwhile, Denise took to Instagram to share a series of old magazine covers she was featured on Thursday, May 7, after the episode aired.

“Going down memory lane with this #ragamuffin,” she wrote. “Just a few covers for #tbt.”

Kyle took to Denise’s Instagram post and apologized. She claims that she was “emotional” and “exhausted” when the episode took place.

The Real Housewives of Beverly Hills airs on Wednesdays at 8 p.m. ET on Bravo.

Who Will Be The Next ‘Bachelor’? One Contestant Reportedly Getting ‘The Bachelor’ Edit
‘Bringing Up Bates’ Fans In Despair Waiting On Renewal Or Cancelation
Oh No! Is Courtney Waldrop’s New Baby Sick? Fans Urge Medical Care
Katie Thurston Plays Wingwoman For Contestant She Rejected
‘Days Of Our Lives’ EXCITING Comings & Goings: Johnny DiMera All Grown Up – Rex Brady Back