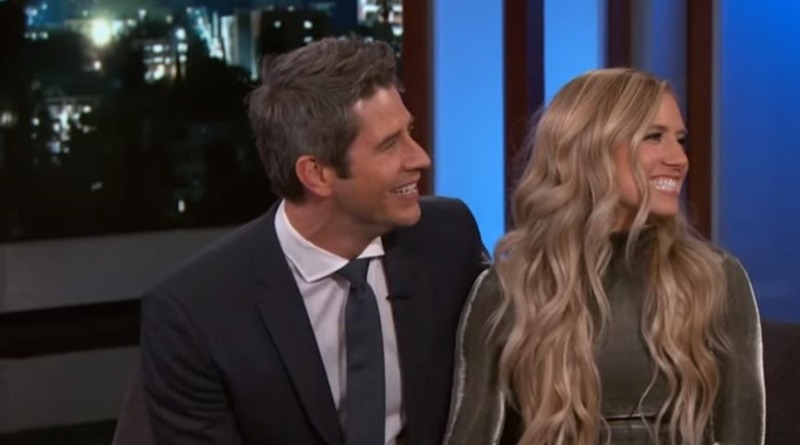 Bachelor alum Arie Luyendyk and Lauren really seem happily married. Despite first proposing to Becca Kufrin, he and Lauren Burnham tied the knot in Hawaii. Now, much like other couples suffering some sort of coronavirus hair syndrome, he joined many other celebs and dyed his hair. And for many people, his platinum blonde look’s a big hit.

All the stay-at-home regulations for coronavirus seem to lead to one boredom-saver conclusion. Many celebs feel the need to dye their hair. Jim Parsons, Brett Favre, Tom Schwartz, Meyers Leonard, Brad Paisley, and more, all changed their hair color. And now, Arie Luyendyk followed the trend. Lauren gave him a cut and his hair’s now platinum blonde. The rather startling transformation got a few critics. But mostly, fans seem to think Lauren killed it with the color and style.

The Bachelor alum took to his Instagram and shared a photo of his new appearance. He captioned it with, “It’s a vibe.” E!News reported that earlier, Arie also talked about his hair change on his Instagram Stories. They noted that he showed Lauren…hard at work perfecting the shade.” However, it came out a sort of “orange” color. Lauren said  “I’m dyeing it dark tomorrow.'” But, Arie added some toner and turned out a stunning color.

Fans on Instagram mostly seemed to like the new look for Arie. One fan noted, “Dude, you rock it! Looks even better in the sun! 😎” Then, another follower wrote, “Hahaha I can’t believe it!!! I think you should keep it! Also, Lauren really killed it with your hair cut! I’m impressed 👏🏻.” One person commented that the color and style give Arie “Kind of Zac Efron vibes.” One joked, “I guess you’ll find out if blondes really do have more fun!🤣😂🤣🤗.”

But jokes aside, it’s interesting that so many people across the world suddenly decide they need to change their hair color. Is it just plain boredom from quarantine and being locked away for so long? Or could the Bachelor alum, like so many celebs just feel a bit lost over their sudden lifestyle change? Perhaps there’s some sort of mild situational depression setting in. After all, nearly everyone went from a hectic lifestyle to confinement at home, isolation from loved ones and friends, and a loss of physical contact.

According to health.com, situational depression’s “classified as an adjustment disorder.” Apparently, it follows the adjustments people make after “experiencing trauma or a dramatic change in day-to-day life.” However, luckily, it usually passes quite quickly and is known to often be “transient.” While it may often follow the trauma of the death of a loved one, sudden changes in day-to-day life can trigger it. And, maybe, there’s a possibility, changing hair color’s a subconscious way of attempting to change the circumstances.

Of course, it’s only speculation, and in the meantime, many fans get a giggle over celebs who change their hair color. Or, like Arie Luyendyk, they sometimes get loads of approval. What do you think of Arie’s new platinum blonde look? Sound off in the comments below.