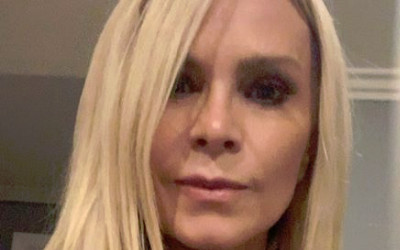 The Real Housewives of Orange County alum Tamra Judge is feeling nostalgic. She dug out her old Juicy tracksuit circa 2005 and reflected on her pre-Real Housewives days.

Tamra is also teaming up with BFF and former RHOC star Vicki Gunvalson for a virtual happy hour. And fans are not happy about it.

Plus, did Kelly Dodd and Shannon Beador learn anything after fan backlash for ignoring social distancing guidelines?

RHOC’s Tamra took a stroll down memory lane earlier this week, BravoTV reports. The stroll took a detour into her closet. She threw it way back by snapping photos of her wearing a Juicy tracksuit circa 2005.

The tracksuits were all the rage in the mid-aughts. But the comfy couture wasn’t the only thing Tamra looked back on.

In a lengthy Instagram post, Tamra reflected on how the current quarantine compares to her pre-RHOC life in 2005. As any Bravoholic knows, the Real Housewives franchise kicked-off with RHOC in 2006.

Tamra started her post by noting she woke up thinking about the years past. She wrote, “Woke up today happy thinking about old times, 2005 before I was a “TV housewife” and how simple life and the world was.”

The CUT Fitness owner notes that her “heart breaks” for anyone who has lost a loved one to COVID-19. However, Tamra writes that she’s “NEVER been happier” than she is right now.

Woke up today happy thinking about old times, 2005 before I was a “TV housewife” and how simple life and the world was. Maybe it’s the 2 months in quarantine playing with my mind or this juicy tracksuit 🤣 ? Being home spending time with family , reducing pollution , working less, cooking more, doing crafts with the kids (tie-dye) , sitting around the fire pit talking and learning how to enjoy the simple things in life are NOT that bad. Ya we get a little stir crazy but for the most part, I’ve NEVER been happier. Yes, this virus has brought a lot of devastation 😥 and my heart breaks for the people that have lost their lives and the families picking up the pieces. I pray for you 🙏 As they say”we are all in this together” Can YOU Tell me something good that’s come out of this? ❤️#stayhome #covid19 #staysafe #bethankfuleveryday #imbringingjuicyback

While Tamra may be happier than ever this week, fans certainly are not. On Tuesday, May 12, Tamra took to Instagram to promote an upcoming benefit event. The ZOOM virtual happy hour includes her close friend and former RHOC co-star, Vicki Gunvalson.

The issue fans have with Tamra and Vicki’s ZOOM event is the cost. The initial cost was $250. The money is earmarked for coronavirus relief. However, many fans pointed out that they simply don’t have the money due to being out of work amid a global pandemic.

After seeing the backlash, Tamra updated the post to let fans know she read their concerns. She writes that she got the price lowered. Following the link she provides, TV Shows Ace discovered the new price is $125.

Update ~ I heard your concerns and got the price lowered 🥳 Can you say DOUBLE TROUBLE 👯‍♀️ I am hosting an exclusive Virtual Happy Hour with my girl Vicki Gunvalson this Friday, May 15th at 8 pm EST with @__pozzy__. Bring all of your juicy questions and cocktails because we will be spilling the tea-quila! Limited spots are available. We want to chat with YOU! Please click the link in my bio to secure your spot. #happyhour #quarantineandchill #quarantineparty YES a % of the proceeds is going @directrelief

Tamra and Vicki aren’t the only RHOC stars facing backlash. When Shannon posted a selfie with her Season 15 co-stars last week, Tamra slammed them as “ignorant.”

Shannon defended herself on Instagram but continues to ignore California’s stay-at-home orders. RHOC’s Kelly Dodd posted a series of Instagram Stories of a seemingly drunk Shannon.

Kelly, Shannon and Shannon’s boyfriend were having dinner without sitting six-feet apart. Social distancing guidelines require staying six-feet away from each other.

oooop shannon storms beador is hitting the bottle! and *not so* social distancing with kelly dodd! #RHOC pic.twitter.com/NaDLLA7Lox

The Real Housewives of Orange County is supposed to return to Bravo later this year. However, production is currently on hold due to the coronavirus pandemic.