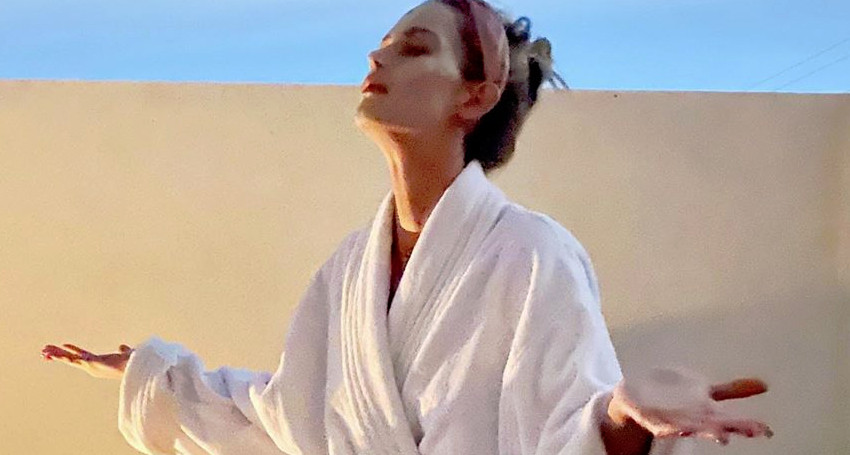 Mommy-shamers are abound on the internet. They hide in the comment section, waiting for a reason to pounce. The Real Housewives of Orange County alum Meghan King faced down a follower who tried to mommy-shame her. The fan took issue with Meghan’s son having his hair tied up with a hairband.

The mom-of-three left RHOC after Season 12. Meghan shares custody of the kids with estranged husband Jim Edmonds. The children were in L.A. with Meghan when the stay-at-home orders went into effect. As a result, Meghan is self-isolating with three young children.

In a vulnerable Instagram post on Sunday, May 10, Meghan admits it can be difficult. She struggles with feeling like a “failure” for not raising her children in a two-parent household.

However, the RHOC star does have a live-in nanny who surprised Meghan with homemade cards from the kids, TV Shows Ace reported.

She Admits She’s ‘Doing the Best’ She Can

Days after her Mother’s Day post, Meghan posted another honest portrayal of motherhood. Sitting on her front steps with her kids, Meghan writes that she’s “doing the best I can.”

Many fans took to the comments to share support for Meghan. But on the internet, there’s always at least one person who has to give their unwanted opinion. Unfortunately for that fan, Meghan shut their attempt at mommy-shaming her down hard.

Meghan Claps Back at Fan Who Questions Son’s Hairstyle

As fans know, Meghan was pregnant with twins when she left RHOC. The twins, Hayes and Hart, turn 2-years-old next month. Meghan revealed last year that Hart has permanent brain damage. In fact, that’s why the family was in L.A. in the first place. Hart goes for therapy in California.

In the family photo, Meghan’s daughter, Aspen, sits next to her while the twins stand in front of her. The front of Hart’s hair is bunched at the top of his head, held in place by a hair tie.

Don’t mind me over here just doing the best I can. 👊🏼

A fan jumped in the comments to ask why Meghan puts a rubber band in her young son’s hair. The fan clearly didn’t expect a response from Meghan, but a response is what they got.

Meghan retorted that her son has a cowlick that gets in his eyes. Furthermore, the RHOC alum states that she doesn’t believe in “gender-specific haircuts.” Meghan also notes that Hart is “proud of his man bun.”

Other fans flocked to the replies to show support for Meghan. One fan noted that, of course, the complainer’s name is Karen.

Another fan politely inquires about Hart’s face. A large red mark can be seen under one of his eyes. Meghan let the fan know that Hart is okay. He just “face planted on the asphalt.” Another fan chimed in that a spill is a child’s “rite of passage.”

Tell us in the comments if you think Meghan was right to clap back. Check out her Instagram account for the funny TikTok videos she often posts to amuse her fans.

The Real Housewives of Orange County is currently on hold from production. As with most TV shows, the pandemic has shut down filming. Check back with TV Shows Ace for updates on when filming will resume.

Netflix Reveals If It Will Save ‘Manifest’ From Cancelation
‘Renovation Island’ Resort: How Much Does It Cost To Stay?
OMG!!! Hulu Has BIG NEWS For Fans Of ‘Solar Opposites’
Thirsty ‘Too Large’ Fans Agree Dr. Procter Is A ‘Daddy’
‘Luca’ Post-Credits Scene Explained: What The Heck Happened?!