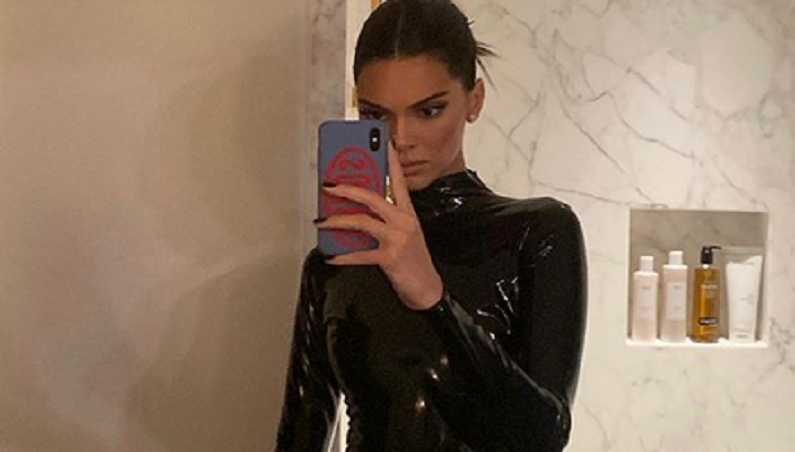 Kendall Jenner is lounging around in lingerie during the quarantine. The 24-year-old model took to Instagram to post a stunning photo of herself. It’s no secret that Kendall loves to pose in lingerie. After all, she’s the face for the Calvin Klein brand.

However, Kylie Jenner called the new photo “rare Kendall content.” This comes after the model got 128 million Instagram followers. She decided to commemorate the special moment with a steamy photo of herself wearing a black lace teddy. Kendall isn’t one to post on Instagram everyday like her little sister, so she had to make it a good one.

Model shares selfie of herself wearing black lace in bed

Per People, Kendall Jenner is back to practicing social distancing amid the coronavirus pandemic. The supermodel was bored, so she staged a mini photo shoot in her bedroom. In her new Instagram post, Kendall wore black lace lingerie in bed. She posed with her back arched and her derriere in full view of the camera. She pouted her lips at the camera and captioned the photo, “did my makeup n stuff.”

did my makeup n stuff

Kylie Jenner wrote, “This is rare kendall content!!!!!” underneath her sister’s photo. But this isn’t the first time Kendall shared a sensual selfie from her bed. She previously shared a series of photos of herself in a white tank top with seafoam green undies. Kendall also had a face mask and a Nintendo Switch in her hand. It looks like she was enjoying some Super Mario. In the caption, she wrote, “wbu?” which is short for, “What about you?”

Back in isolation, away from her sisters

Per Hollywood Life, Kendall is currently self-isolating away from her sisters. But she did reunite with Kylie to film a clip for Justin Bieber and Ariana Grande’s quarantine-themed music video for their single Stuck With U.” It shows the famous sisters dancing with each other on the tennis court at Kylie’s new $36.5 million Holmby Hills mansion.

These steamy photos come after Kendall went off after an online critic who claimed that she dates a lot of basketball players. Her clever comeback came when photos surfaced of her hanging out with Phoenix Suns star Devin Booker were published online. This led to one online troll to tweet a TikTok video of three men tossing around a toddler in a circle.

One of Kendall’s fans responded that “maybe she [was] passing them around.” The model entered the Twitter read with her infamous tweet, “they act like i’m not in full control of where i throw this c**ch.”

Sources close to the 23-year-old basketball player are denying that he’s dating the reality star. The insider told Entertainment Tonight the pair are “absolutely not dating” or “hooking up.” According to the insiders, Kendall and Devin are just friends who ran in the same social circles for years. The squad also includes other NBA players that Kendall considers nothing more than just friends. The basketball players also respect Ben Simmons, the model’s ex-boyfriend.

Check back with TV Shows Ace for the latest news on Kendall Jenner.