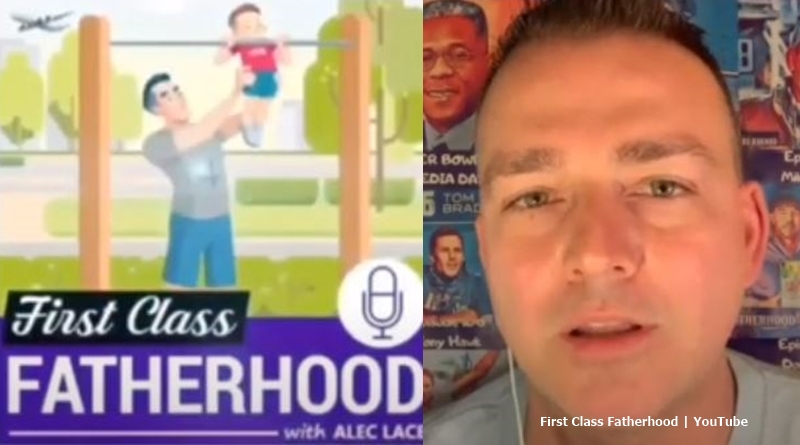 First Class Fatherhood rocketed in popularity and Alec Lace hosts many famous faces on the family-oriented podcast. Success doesn’t come easy for podcasters, so TV Shows Ace asked Alec how he managed it. In our exclusive, Alec talked about his motivation, the history of his podcast, and much more.

TV Shows Ace reported that Alec approached Bravo’s host Andy Cohen for an interview. Certainly, as a single dad with a unique experience of surrogacy in the LGBTQ community, fans would love to hear from him. Alec said he still hopes that Andy responds. We noted that Alec comes with an impressive list of famous faces. We reported that “Alec Lace…recently talked with NFL Linebacker, Brandon Copeland.”

Many other famous faces popped up on the First Class Fatherhood podcast. These include “Derick Dillard, Ryan Harris, Dan Abrams, Nick Ayers. Adam Busby, and many more.” We covered Jon Gosselin from TLC’s Jon and Kate Plus 8, Matt Roloff from Little People, Big World, and Adam Busby of OutDaughtered. They all opened up to Alec on his podcast this year. Notably, Alec also hosted famous faces from New England Patriots, including “Tom Brady, Julian Edelman, and Bill Belichick.” In his interview with us, he mentioned most of those people.

We asked Alec, “How much feedback do you get from Dads who listen to your podcast? And, do you ever do interviews based on your listeners’ requests?” Well, Alec also gets loads of feedback from moms and wives as well. He explained, “Both Jon and Matt [got] destroyed on Social Media. It [became] better for Jon because he was finally able to tell the truth once his gag order got lifted.  I’m confident it will get better for Matt as well, once the truth comes out with his situation.”

Alec continued by saying that “overall” feedback seems “positive.” But, “certain guests…trigger certain listeners, such as when I interviewed President Trump’s son Eric Trump. Even though we didn’t discuss politics, I took some heat on social media for that episode [on First Class Fatherhood]. The listeners make suggestions all the time as does my wife, Jessica, who is the one who suggested dads such as Jon Gosselin and Matt Roloff.

Alec feels that there’s “way too many to choose from” to identify the most inspiring thing ever said on the podcast.  That’s “because so many inspiring things have been said over 340 plus episodes.” But, he noted how inspired he felt by “UFC President Dana White discussing his legacy while on the podcast.” Alec said, “[He’s] a dad who built the UFC into a multi-billion dollar enterprise. Yet, he said the only legacy that truly matters to him when life is over and he is lying there in the box, is not what he accomplished in the business world.” Rather, its more important to him what his “kids say about him as a father.”

Alec Lace recalls that “Dana also enjoyed his experience on the [First Class Fatherhood] podcast so much, that “he invited my wife and I to join him at Madison Square Garden for UFC 244. That made for an awesome date night and Dana couldn’t have been nicer to us.” However, that sort of success didn’t just fall into Alec’s lap. In fact, Alec already conducted “47 episodes” before he got his first big break. Aspiring podcasters and bloggers should note that they must ask people for chats and input.

Alec reached out to “Superman star Dean Cain.” He said, “I reached out to Dean on Twitter and he agreed to do the podcast. We had a wonderful conversation about Fatherhood and family life. Dean revealed that at one point during his custody battle for his son, he was put in a position to either accept a TV role, which at the time would’ve made him one of the highest-paid actors on television, or be a father.”

He told Alec that “he turned down the role immediately.” Furthermore, “Dean really enjoyed his experience on the podcast and shared it on his social media. The episode blew up and First Class Fatherhood became the number 1 ranked Kids and Family podcast on iTunes that week as a result.” Well, that sort of success made it a bit easier to land interviews with the likes of Tom Brady, Julian Edelman, and Bill Belichick. Alec also interviewed “all the Dads from the 49ers and the Chiefs at Super Bowl 54.”

Despite moving in such lofty company, for Alec, his highpoint came last Father’s Day. He said that he chatted with Pete Hegseth. Recalling that day, Alec noted, “Fox sent a car service to my house to pick me up and drive me to the studio. Seeing my kids’ faces as the car pulled away felt priceless.” Then, “walking into the studio and seeing the First Class Fatherhood logo in a gigantic image on the wall felt very humbling.”

That seems the point where Alec realized the enormity of his success as a podcaster. He reminisced about it, saying that he “sat in that room alone for a minute or two.” He “reflected on how far the podcast went and how far it can go.” Alec added, “My wife recorded my kids’ reactions as they watched me on live TV,” and he described it as “awesome.” The First Class Fatherhood host noted, “They watched me start this podcast in my bedroom closet and now watched me on National TV.  It hammered home the valuable lesson of hard work paying off.”

Did you know that Alec Lace never came from a famous background? The podcaster never got a boost from featuring in a reality TV show, or from a background in sportscasting. To this day, he still takes himself off to work. Alec works as a  railroad mechanic. He started off with his career 20 years ago. So, potential success comes for those who make a serious effort. In fact, Alec holds down a second job and takes his message about fatherhood to people who use Uber.

Alec said, “Driving for Uber provides multiple services for me.” Firstly, it helps him earn some “extra money” for his “family.” Plus, it naturally brings the opportunity for promoting his podcast. Following the advice of the likes of Small Business, The Balance, he always carries business cards with him. So, each customer gets one. Then while waiting around, Alec uses the time productively. He listens to “recordings” and notes down “edits” for First Class Fatherhood. Customers hear from Alec about how “great” fatherhood can be. Notably, he racked up an impressive list of people on his podcast that might convince hesitant would-be dads.

Looking to the future

We asked Alec where he sees himself in five years’ time. But things changed for Alec rather fast. He said, “Five years ago, I never would’ve told you I’d be podcasting and interviewing guys like Tony Hawk and Tom Brady, so it’s difficult to say.” But, he fully intends to continue with “learning, growth, change, and more development.” In five years’ time, his eldest son hits “19-years-old.” By then, Alec hopes and prays he’s “ready for all the changes to fatherhood that it will bring.”

Alec’s totally “passionate about being a dad.” For him, changing “the narrative on fatherhood and family life” remains a top priority. Alec feels that too many men fear family life. “They see it as something to put off in life until much later and not something to embrace early.” That results in “many dads” approaching fatherhood with a “negative mindset.” As Alec noted, the United States experiences “a Fatherless crisis.” The First Class Fatherhood host added, ” Too many kids are growing up without a father in the home.” It brings a “devastating impact on our society.”

Alec’s future remains with his podcast because people prioritize the wrong things, he believes.  These include, “money, career, cars, homes and other material things.” Alec believes that the people he hosts bring an “important” message. Despite achieving as “Super Bowl MVP’s, NFL Hall of Famers, Multimillionaire Entrepreneurs, Navy SEALs, Celebrities, they state that “despite all of their amazing accomplishments, it’s only through the experience of becoming a dad that gave them a true sense of fulfillment.”

He believes they bring “true testimony of what fatherhood’s all about.” The success of First Class Fatherhood certainly points towards the need for aspiring podcasters with passion. Hard work, dedication, and self-confidence seem part of the success parcel. One message on Twitter to a famous person helped pave the road for Alec Lace.

Remember to check back with TV Shows Ace often for more news about reality TV and the First Class Fatherhood podcast.