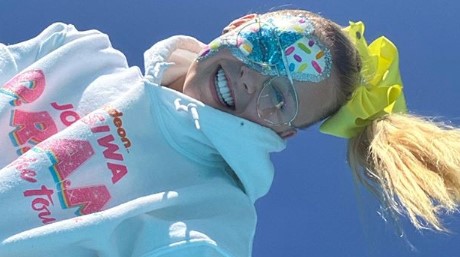 Dance Moms star JoJo Siwa is known for her high, slicked-back ponytail. In an exclusive interview with Us Weekly, she admits that she rarely took her ponytail down and didn’t shower often between shows. After wearing her hair in a ponytail for years, JoJo finally took it down to film videos for TikTok.

In the interview, JoJo explains that she didn’t have the best hygiene habits while she was on Dance Moms. In addition to telling the interviewer that she sometimes only showered once a week, she says, “Literally, what I would do is I would put my hair in a ponytail. I’d fall asleep with it in a ponytail. I would wake up and I would just re-slick it. Like I’d just spray down my wispies and I’d go on with my day.” JoJo’s old shower habits now make her gag.

JoJo also explains that she’s been wearing her signature side ponytail since long before her appearance on Dance Moms. She says that her mom has been putting bows in her hair since she was a baby. As soon as JoJo’s hair was long enough to wear it in a side pony, it never came back down.

JoJo’s bow is just as recognizable as her ponytail. These bows are even sold in many stores, and little girls who look up to JoJo wear them. She says that there are over 12,000 styles of JoJo Bows, including the “This Is My Party” bow and the “Colorful Craze” bow. Her personal favorite is a bow made entirely of rhinestones. According to JoJo, there’s no such thing as too many JoJo Bows.

JoJo takes the ponytail down

JoJo first revealed her natural hair in a TikTok video on April 20. In response, fans expressed their surprise in the comments. They tried to encourage JoJo to wear her hair down more often and said that she looks better without the ponytail. Since the April 20th post, JoJo has posted more videos without the side pony. She shows off her wavy, straight, and braided hair.

Fans in the comments on JoJo’s TikTok’s wondered if this is a “new JoJo.” However, JoJo assures them that she is still the same person, but she’s being more authentic on social media. In a video she posted on TikTok on April 30, she explains, “Recently I’ve shown myself looking different… not the classic rainbow, sparkles, and side ponytail with a JoJo Bow.” She continues, “I love who I am! This is just me at night or in the morning!” In the interview with Us Weekly, JoJo claims that her viewers’ responses had no effect on her decision to continue posting videos with different hairstyles.

What do you think about JoJo revealing her natural hair? Let us know in the comments.

Could Hallmark, Lifetime Christmas Movies Be Canceled Due To Hollywood Strike?
Savannah Chrisley Secures Her Back-Up Baby Daddy: Who Is He?
‘LPBW’: Little Lilah Does The Most Precious Act Of Love
Duggar Cousin Amy King Fires Shots At Uncle Jim Bob’s Family Values
Quick And Twisted: ‘Survivor’ Is All New Due To COVID