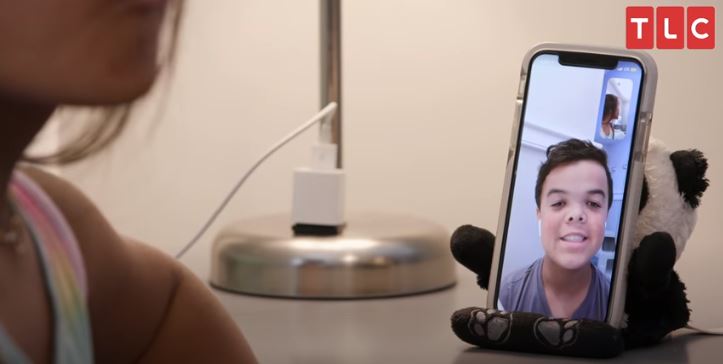 This week, everyone under 30 in the 7 Little Johnstons clan was overjoyed to bid farewell to the RV that took them through their travels up the Pacific Coast Highway.   Jonah declared that “mom and dad were the ones who liked the RV,” but he and his siblings were beyond ready to bid the motor home farewell.

Delight was in the air and so was romance when the 7 Little Johnstons pulled into San Francisco for the annual Little People of America convention.  Trent and Amber let go of some of their stringent rules during this cherished time when they and their children get to look at people “eye to eye” instead of seeing only “belt buckles and butts” as Amber frankly puts it.

The standards are that the kids stay safe, act like they’ve been taught, and be back in the room by 1:30 AM, or text permission for alterations, each night (or morning) of the convention.  Everyone also has to be ready to board for the trip back home by 10 AM on the last Saturday.  These 7 Little Johnstons regulations are down pat.

Trent teased that even of the police were called for the kids’ bad behavior “I still wouldn’t do nothing,” but everyone knows the doting dad will defend his family to the nth degree.  In this week’s May 12 episode,  “It’s a Small World,” the 7 Little Johnstons patriarch gets more than peeved when a day of outdoor play is intruded on by some mocking male juveniles.

Emma, on the other hand, celebrates the best birthday ever with Luka and both their families.  Anna has a fun time with a new friend, too.

The first morning in San Francisco, the 7 Little Johnstons are on their way to a designated meeting place to greet Luka and his family.  Long before reaching that destination, the family spots Luka rushing past crowds and straight to Emma for gigantic hugs.  Emma and Luka man at last year’s LPA event, and the two keep in constant face time connection.

It was nice for 7 Little Johnstons fans to see how close the families seem to be.  Luka got and gave hugs all around, and both families embraced.  Trent joked that Luka often has dinner at the Johnston family table through cyber connection.  Emma makes no secret that she and Luka say “I love you” all the time.

Amber and Trent seem to fully support the relationship, strictly enforcing that dating can’t happen until age 16.  Luka and Emma are very agreeable to those terms.  Monsters & Critics revealed the ages of the family in a May 12 feature.  Amber understands that the relationships forged with LPA friends are automatically “on a deeper level,” due to shared understanding and perspective.

Luka was having some problems with back pain during the convention, as Trent related.  The handsome beau prepared a perfect birthday celebration for Emma and even got to duel like a pirate.

The 7 Little Johnstons happened to pass by a pirate shop soon after they arrived in San Francisco.  The whole family him jumped in on some swashbuckling fun.  Everyone, including the girls, donned eye patches, pirate hats, and mustaches.  Alex and Luka had lots of fun with swords, and a “mop ghost” tried to scare Trent.  “That don’t work too well on us,” Trent explained to the shopkeeper, “it only tickles our hands.”

Luka pulled out all the stops to celebrate Emma’s 14th birthday.  Bicycle carts and drivers pedaled the sweethearts and both their families to Chinatown for a full day of fun.  They practiced making fortune cookies.  The girls were much more skilled than the guys.  The parents and the families sat at separate tables, where they were still in a clear eye view of everything happening.  It was a memorable day in many ways for the 7 Little Johnstons.

After their Chinese dinner feast, Luka presented Emma with a real “love note,” and a small box.  She opened the gift to reveal a delicate pearl necklace.  Luka fastened it around her neck, then gave a gentle hug.  The youngest daughter in the 7 Little Johnstons called this year “a perfect birthday.”

Trent has it out with some truly rude dudes

Trent and Amber arranged an outdoor play day for some of the families at the LPA gathering, and the whole day was a joy until Jonah first noticed a group of young guys “chanting at” the family.  The kids try to ignore the rudeness as just a distraction, but Trent gets up to go have a talk with the group.

Even when Mr. Johnston approaches, one of the guys kneels, making a scoffing gesture.  Of course, this does nothing to de-escalate the situation.  “Y’All are the ones acting like a@@holes,” the father insists.  At one point, Jonah gets up and starts to move in his dad’s direction.  Amber firmly tells him to sit down.

TV Shows Ace covered this encounter from a preview, but seeing the full behavior of these “boys” makes Trent’s ire understandable.  “I hate to use the word ‘bully’ and ‘victim,’ but d@#* if that ain’t what it is,” he described to the cameras. This isn’t the first time on the 7 Little Johnstons when Trent has been very direct to take on verbal assaults on his family.

"At no point should we leave because of our size…."

When the Johnstons attend their annual LP conference, things seem to be going pretty well… until a group of obnoxious young men start to cause trouble.

Fortunately, insulting guys departed, and the  7 Little Johnstons have a lot of good memories to take home from this year’s LPA convention.

Anna met a new friend, Daniel, from Australia, and the two took a sightseeing trip to the Golden Gate Bridge.  Elizabeth had a lot of fun (and ice cream) with her best girlfriends.  She introduced Brice to everyone by telephone.  It seems like he passed the test—he certainly blushed.

Next week, Anna meets new challenges of her own on 7 Little Johnstons, per the preview peek.