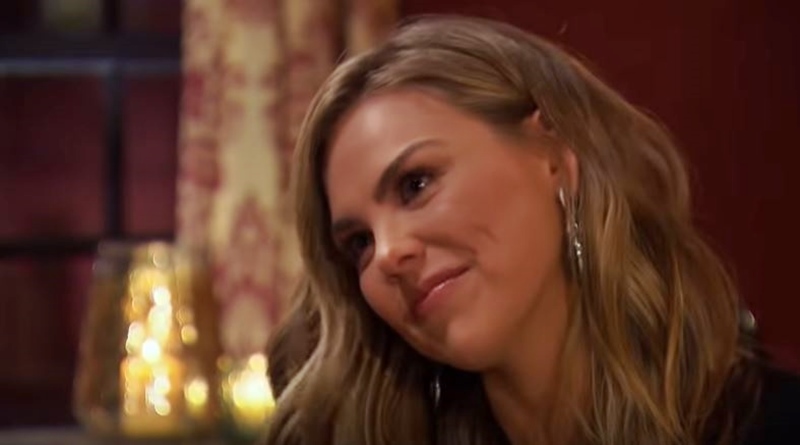 The Bachelorette fans know that Hannah Brown ended up with nobody on her season of the ABC show. She chose Jed Wyatt over Tyler Cameron but dumped him in the end. Hannah felt Jed was dishonest, and she likes honesty in a man. She and Tyler met for a date after the show but that never worked for them as he then dated Gigi Hadid. Now, looking back at the day she made her choices, Hannah spoke to the person she used to be.

The Bachelorette – Hannah ended up with nether Jed or Tyer

The day that Hannah chose Jed instead of Tyler Cameron blew a lot of fans away. She was all ears for Jed and hardly gave Tyler any notice at all. But she quickly realized she chose the wrong man. She didn’t like that Jed already dated a woman and hurt her terribly when he went on the show. TV Shows Ace reported that Hannah likes “honesty” in a man. So, it looks like Jed cooked his goose the moment Hannah found about his girlfriend.

Jed, Tyler, and Hannah Brown went their own ways after The Bachelorette. Hannah went off and worked with Dancing With the Stars. Meanwhile, Jed disappeared into obscurity. And, Tyler fleetingly dated Gigi Hadid and seemingly just enjoyed not being tied to anyone.

When his mom passed away, Hannah went to the remembrance ceremony. Later, she pitched up in Florida where she spent a month with Tyler and his family and friends. But it seems the couple never got any romance going. Tyler told ET Online, they remain good “friends.”

Hannah Brown talks to herself

Taking to her Instagram on Monday, Hannah Brown shared a throwback photo to a year ago. She captioned it with, “Ever look back on a memory and it feels like just yesterday… but also like a different life? Me too. Exactly a year ago today.⁣” She talked about what she’d say to herself if she could go back in time. Hannah wrote, “I remember thinking, “Oh, this has all the makings to be the best day of my life…but gah, it doesn’t feel like I thought it would.” And she mentioned her reservations.

As The Bachelorette lead just “couldn’t shake the doubt,” she’d tell herself, that “it’s okay.” She noted, “You’re right, this ain’t it, but it‘s the direction. So open up your hands, and let go of the control. Trust this process, it’s going to be worth it.” Hannah got through that difficult time and now feels the whole thing was worth it. She says that today, she “[stands] in the sun.” Naturally, fans reacted to her insightful post.

Ever look back on a memory and it feels like just yesterday… but also like a different life? Me too. Exactly a year ago today.⁣ ⁣ I remember that day. I don’t like staying there for too long, but I remember it really well. I remember thinking, “Oh, this has all the makings to be the best day of my life…but gah, it doesn’t feel like I thought it would.” I didn’t have words (or maybe I just didn’t have the courage to say them?) but the pit in my stomach was screaming, “this ain’t it” (funny how sometimes it’s the people around you that help you articulate your feelings better than you can). I could fake a smile but I couldn’t shake the doubt, and looking back, I know why. That ending was not easy, but it was necessary to get me here.⁣ ⁣ If I could go back and tell her something, I would whisper, “It’s going to be ok. You’re right, this ain’t it, but it‘s the direction. So open up your hands, and let go of the control. Trust this process, it’s going to be worth it. Also, nice butt!”⁣ ⁣ If you are reading this right now, wondering how to navigate a situation that feels so painful and so not what you wanted, maybe you’ll let me tell you what I would’ve told myself: Hold on. Keep moving. You’re going to make it. This ain’t it but what’s coming is so much better.⁣ ⁣ Sometimes you’ve gotta walk through the shadows to stand in the sun. And trust me, you’ll really appreciate the way it feels shining down on you, too.

Lots of fans commented on Hannah’s post and many of them know exactly what she means, from their own experiences. One The Bachelorette fan said, “This is what I needed to hear right now❤️.” Another noted, “Well put, Hannah! I love that your journey can encourage other people to believe in the process as well! Good things take time and things happen for a reason. ❤️”

What do you think about the talking-to that Hannah gave herself from a year ago? Sound off in the comments below.

Remember to check back with TV Shows Ace often for more news about Hannah Brown from ABC’s The Bachelorette.