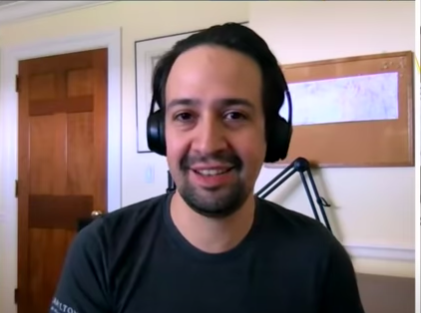 Don’t throw away your shot! No need to worry if you haven’t been one of the lucky people to see Hamilton live on Broadway yet. Soon you can watch it from your very own home!

Walt Disney Company’s Bob Iger and writer/star Lin-Manuel Miranda made quite the announcement on Good Morning America Tuesday. People reported that the duo revealed that the smash-hit Broadway show Hamilton will be coming to Disney+. The show will be available on July 3.

In case you have lived under a rock for the past 5 years, Hamilton is a hip-hop musical by Lin-Manuel Miranda that tells the story of American Founding Father Alexander Hamilton.

People went on to report that Iger said, “No other artistic work in the last decade has had the cultural impact of Hamilton — an inspiring and captivating tale told and performed in a powerfully creative way. In light of the extraordinary challenges facing our world, this story about leadership, tenacity, hope, love and the power of people to unite against the forces of adversity is both relevant and impactful.”

Interestingly, the new movie that is coming out was recorded over three days back in June 2016.

Now, this patriotic musical will make its movie debut on Disney+ just in time for this year’s 4th of July holiday.

Miranda praised the movie’s director saying, “I can’t say enough about what an incredible job Tommy Kail, our director, has done with the movie. He’s basically given everyone at home the best seat in the house. It’s a thrilling experience.”

He then went on to say how proud he was of director Kail. Kail’s talent for capturing the film version of the live musical Hamilton truly impressed Miranda.  Miranda wrapped it up saying, “We’re excited to partner with Disney to bring the original Broadway company of Hamilton to the largest audience possible.” And that he cannot wait for everyone to see it.

Back in February, Disney revealed its plans to release the original Broadway production film in movie theaters during fall of next year. The original release date was October 15, 2021. This date was set before the unexpected coronavirus pandemic surfaced.

What do you think of Hamilton coming to the home screen? Are you excited? Will the TV screen do it justice? Let us know what you think in the comments below.