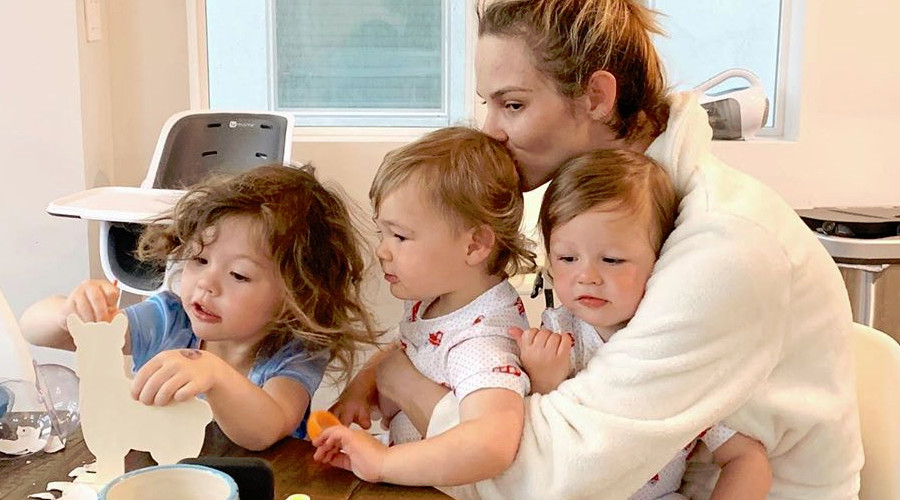 In an Instagram post celebrating Mother’s Day, Meghan got real and honest about observing the holiday as a single mother.

The RHOC star’s Instagram post went to the heart of the issue right off the bat. She wrote about being quarantined with “3 screaming toddlers” for over two months.

Meghan is caring for the three young children she shares with her ex-husband, Jim Edmonds. Since the children were with her when the stay-at-home mandate began, she (and her nanny) had been their sole caregiver for nine weeks.

Meghan writes that the quarantine has “killed our spirits and crushed our souls.” As a result, she “wasn’t looking forward to” Mother’s Day. In fact, she reveals that she hasn’t been “earning any mother-of-the-year awards.”

The RHOC Star Shares Regrets About Family Splitting Up

Meghan also struggled with celebrating Mother’s Day without her children’s father. She wrote that she “NEVER” envisioned raising her kids in a one-parent environment. In fact, Meghan feels “deeply regretful” about spending Mother’s Day “without a partner.”

Furthermore, Meghan vulnerably reveals that she feels like she “failed” her children by splitting up with Jim.

Misses Her ‘Freedom’ But Focusing on Things She ‘Can Control’

Despite her regrets, the RHOC star chooses not to dwell on “mistakes and sh*tty situations.” Instead, she vows to “control” her reaction to them.

While Meghan has a strained relationship with her step-children from Jim’s previous relationship, she pays tribute to them in her post. She writes that she “misses” them and they made her “a mother before” she had her own children.

As much as Meghan determines to look forward, she can’t help but “mourn the loss of what might have been.” Acknowledging that raising kids alone is hard, Meghan reveals that she misses her “freedom.”

I wasn’t looking forward to this Mother’s Day. Quarantined with 3 screaming toddlers for 9 weeks while trying to work hasn’t exactly been a prime environment for me to feel like I’m earning any mother-of-the-year awards. Being prisoners in our home has killed our spirits and crushed our souls. Then add this: it’s my first Mother’s Day I’m spending without a partner, something I NEVER envisioned. “Families are created out of unconditional love” I thought. “Two parents weather life’s storms but always remain together to celebrate the subsequent rainbows” I thought. But that is not my story and that makes me feel deeply regretful – like I failed my children by not giving them a nuclear family. But today I am refusing to dwell on mistakes and shitty situations I can’t control; today I control my reaction. I miss my step-kids who made me a mother before I had children of my own and I am sending them so much love. I miss my freedom. And I mourn the loss of what could’ve been. But despite this I look at my beautiful tribe with pride because I am a mother to three incredible kids and I’m the only one they’ve got. To all the mamas out there, I lift you up in solidarity for the all the hard times and in celebration of the good times. Hats off to us today, for all the hats we wear. 🎩 🧢 👒🎓👑

People reports that the RHOC star got a little taste of that freedom on Mother’s Day. In her Instagram Stories, Meghan tells fans that the children’s nanny took them out of the house for a while so Meghan could have some “me time.”

In addition to letting Meghan relax, the nanny surprised the RHOC star with homemade cards, flowers, and donuts from the kids.

Meghan paid tribute to all the things moms do for their kids. She wrote, “Hats off to us today, for all the hats we wear.”

Tell us in the comments how you celebrated Mother’s Day.

The Real Housewives of Orange County is currently in production limbo. It will likely resume filming once the coronavirus quarantine is lifted. Check back with TV Shows Ace for further updates.