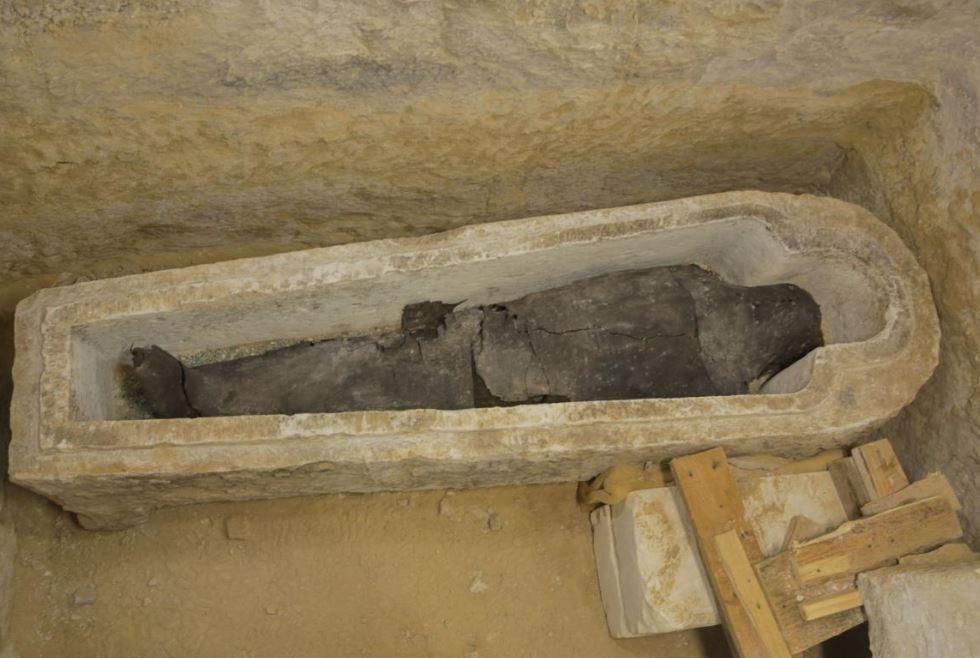 On Tuesday’s new series Kingdom of the Mummies on National Geographic Channel, TV Shows Ace has the exclusive preview of never seen before footage from a burial complex underground.

The new, four-part series Kingdom Of The Mummies is produced for National Geographic by BBC Studios.

An academic team explores the subterranean chambers and they open four sealed, 2,600 year-old sarcophagi to unlock secrets forgotten since the time of the ancient Pharaohs.

Kingdom Of The Mummies shows the first evidence that mummification took place underground, and we are along for the ride with the scientists who are at the edge of this discovery.

Saqqara, Egypt in the shadow of the world’s oldest pyramid our exclusive clip shows renowned Egyptologist Dr. Ramadan Hussein and his team of archaeologists of the new series Kingdom Of The Mummies who are investigating a groundbreaking new site.

What does Dr. Hussein find?

Taking us deep inside the catacombs of the pyramid, the burial chambers and the connecting rooms, Dr. Huseein shows is an undisturbed burial chamber. He says: “This is one of the most beautiful mummies I have ever seen in my life.”

The footage takes us inside a two and a half thousand year old funeral home where ancient Egyptians, both rich and poor, were mummified and buried deep underground.

He says: “What makes the site so special is that nothing remotely like it has ever been found before. Personally I never thought I will be making discoveries like this. We’re always collecting information about ancient Egyptians, but discovering [a find of] this magnitude is absolutely unprecedented in Egyptian archaeology.”

Ancient Egyptian Funeral Home Was One-Stop Shop for the Afterlife

A collaborative juncture between Egypt’s Ministry of Tourism and Antiquities, a team of archaeologists led by Dr. Ramadan Hussein from Germany’s Eberhard Karls University of Tübingen, has uncovered this never before seen burial complex. The area explored dates back to 600 BC, deep under the sands at the Saqqara necropolis, approximately an hour’s drive south of Cairo.

Together, Dr. Hussein’s team will decipher clues about Egyptian burial processes. In addition you will be shown dedicated areas for organ removal, embalming and burial, all while learning how the ancient Egyptians took care of the business of death.

In the shadow of the world’s oldest pyramids, a team of archaeologists, led by Dr. Ramadan Hussein, has made the discovery of a lifetime – a fully intact burial complex buried deep beneath the sand. Packed with treasures and world firsts, the site has the potential to re-write the book on mummification, unlocking secrets forgotten since the age of the pharaohs. Now the team must open every sarcophagus, investigate every mystery and decode every clue in this never before seen discovery – the first Egyptian funeral home ever found.

Make sure to record this if you are homeschooling middle school children for a perfect constructed lesson in archaeology and ancient history.

Kingdom of the Mummies airs Tuesday (beginning May 12) at 10/9c on National Geographic Channel.