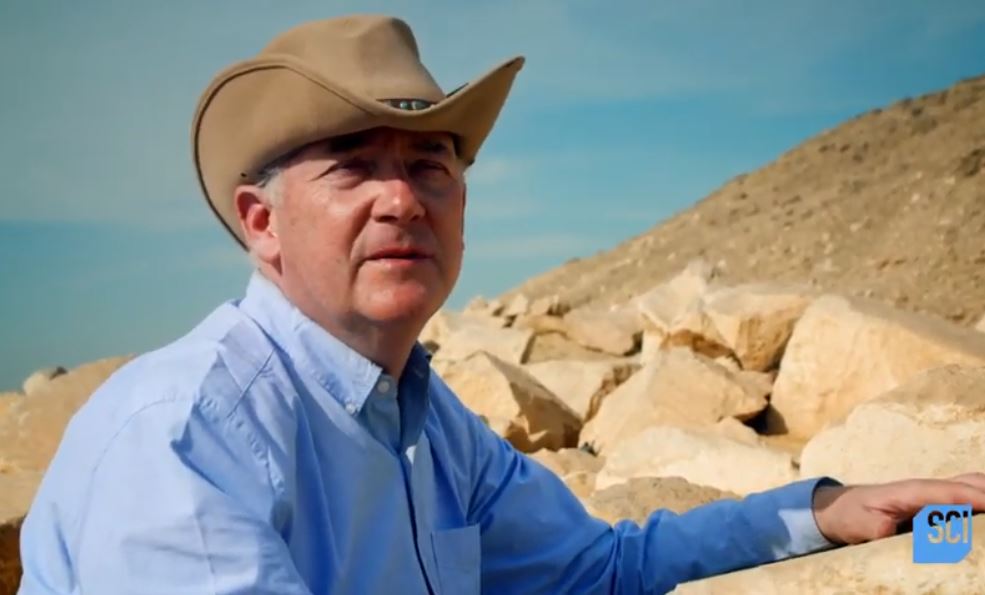 It’s time to get a great lesson in for all budding Egyptologists and archaeologists as Science Channel has a no miss episode of Unearthed tonight. The subject is the mysterious Black Pyramid of Dashur.

Parents and homeschoolers should record this Black Pyramid edition of Unearthed for students learning from home during the COVID-19 stay at home orders.

On this Sunday’s Unearthed, the famous Black Pyramid is where Science Channel producers were one of the first ever film crews to go inside the Black Pyramid. The pyramid was opened at the end of last year.

TV Shows Ace has an exclusive preview of tonight’s episode which is a complete lesson for all students curious about ancient Egypt and the actual work of archaeologists. Unearthed gives rare access into the entrance of the Hawara pyramid which is usually closed, even to film crews.

The Science Channel producers find the uncovered pillars from the legendary Hawara labyrinth. Our guide for the Black Pyramid edition of Unearthed is expert Dr. Steve Harvey, who says that the discovery “was a game changer” for him. The episode shows there’s so much more to discover there for historians.

Solving the Mystery of the Black Pyramid

Unfortunately the pharaoh had some bad luck on where and how it was built. The Black Pyramid was built at the edge of the Nile, just thirty-three feet above sea-level which meant it flooded shortly after the pyramid was completed. The Black Pyramid was also once a gleaming white limestone covered structure, not the mudbrick core that we see today.

Dr. Harvey says: “When I look up at this destroyed pyramid, from a distance it looks really solid. We can see all these multiple layers going all the way up, and it really looks monumental. But when I look down at the ground, I see another part of the story. It’s actually built of this, which is just unbaked Nile mud with straw put into it thousands of years old but still preserved.”

More about The Black Pyramid

The building is made of mud brick and is one of the earliest construction techniques of humanity.  the practice dates from at least five thousand years before the Great Pyramids of Giza.

Dr. Harvey adds: “Some of the original brickwork still in place the mud bricks lying one on top of the other going all the way up toward
that core.”

The Black Pyramid structure  was more than simple mud brick.

Dr. Harvey adds: “What we have here at Dahshur is a limestone casing that totally covered the bricks. Ancient people would have seen a gleaming white stone pyramid from a distance and not this brick material which was hidden.”

He suspects this destruction isn’t caused by natural weathering. Dr. Harvey learns that the ancient Egyptians in later generations came and took the stone instead of pouring it anew from a quarry where they had to bring it cut it and drag it to a building site.

Over time, the desert weather combined with the generations who stole the structure’s limestone coating have let it become this dark and misshapen ruin.

Found buried at the Black Pyramid’s base was a stunning granite carving. Archaeologists discovered this intriguing granite stone engraved with ancient hieroglyphs.  The grey granite pyramidion is now a featured display in the main hall of the Egyptian Museum in Cairo.

Covered with inscriptions, some of the experts posit that it was removed and defaced during the rule of Akhenaten.

Can this stone reveal who built the Black Pyramid? Tune in to take a guided tour with Dr. Harvey as we learn more tonight: