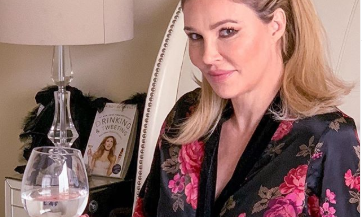 Back in the day, RHOBH stars Brandi Glanville and Lisa Vanderpump were friends who saw each other’s closets. This isn’t great for LVP because now Brandi has revealed what she kept in a secret closet. She feels like it’s shocking information for people to know. As most fans know Brandi doesn’t keep her mouth shut about anything, especially when she gets to talking about reality stars on her podcast.

Recently she shared a lot when she interviewed Dax Holt on her podcast. He used to work as a reporter for TMZ. Among some of the things they talked about was reality stars having to be in good with the media to keep the image of themselves out there. They also talked about housewives who have supposedly had an in with the media. Fans know a huge part of drama between housewives is accusations of stories being sold to the media.

What Did Brandi Glanville Say About Her Relationship With The Media?

Never one to shy away from sharing, Brandi Glanville confessed she made out with a few people who worked at TMZ. She said she will talk to the media on record with no shame. Brandi said, “I’m not like ‘oh by the way, Lisa Vanderpump has fur coats’ – even though she does – oh I just leaked a story.”

She followed this up by saying it wasn’t a leak she just said it on her podcast. Brandi said, “I’ve been in – she has a closet full of fur coats, I’m not lying..” She also said LVP will deny it. Glanville said she’ll deny it because she loves dogs but she’ll wear all kinds of fur. Dax asked if she wouldn’t let the film crew in her closet. Brandi said no, the closet was secret in Lisa’s house then, she showed it to her. Brandi said she wore the furs on the show and would be like ‘oh darling it’s faux. And I’m like ‘that’s a bunny on your head!”

LVP Is An Animal Rights Activist

Dax told Brandi Glanville that it was crazy that she was wearing fur as an animal rights activist. Brandi said she was. Also, Brandi said LVP said something mean about her on WWHL with Andy Cohen and she was being vindictive. Brandi was probably referring to when Andy asked LVP to respond to the podcast host calling her an inspiring businesswoman. According to Bravo TV, Vanderpump said anything she said was totally irrelevant. She said, “Oh my God, if I invested in anything she said, I’d be in trouble.”  Glanville called her a liar among other choice words, she reminded Andy.

Knowing Lisa Vanderpump, this feud will continue with the restaurant owner most likely retaliating on Twitter. Fans will watch both of their social media and listen to Brandi’s podcast to keep up on the latest.